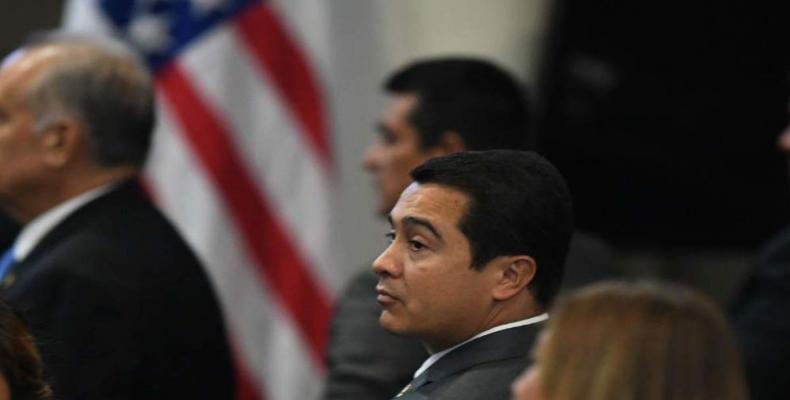 During the trial, the Honduran president was denounced by cooperating former members of the U.S. Attorney’s Office for allegedly receiving bribes for his campaigns to Congress and the presidency, which led the U.S. justice to define the Central American country as a "Narco-State."

In his first public reaction to the veredict, the Honduran president said he was receiving the news with "great sadness" and rejected how his country has been labeled.

Tony Hernandez was arrested in Miami in 2018 and charged with drug trafficking and possessing illegal weapons.  U.S. prosecutors accused him of helping smuggle almost 200,000 kilograms (220 tons) of cocaine into the United States while enjoying the protection of his brother, the Honduran president, who was also receiving drug money for his political campaigns.

Hondurans have taken the streets, demanding that Juan Orlando Hernandez resign as president of the Central American country.   Demonstrators are calling for "permanent protests" throughout Honduras until the president steps down.

Some of the most explosive testimony was from Ardon, who told jurors that Tony Hernandez promised Mexican drug lord Joaquin “El Chapo” Guzman protection for his shipments in exchange for a $1 million donation to his brother’s presidential campaign in 2013.

Rivera Maradiaga, who admitted to murdering 78 people, testified that he paid bribes to multiple officials including Juan Orlando Hernandez.

The president, who began his second term in January 2018 amid allegations of electoral fraud, has not been charged with a crime.

The sentence against his brother, Tony, is slated to be handed down on January 17.  He faces up to life in prison.