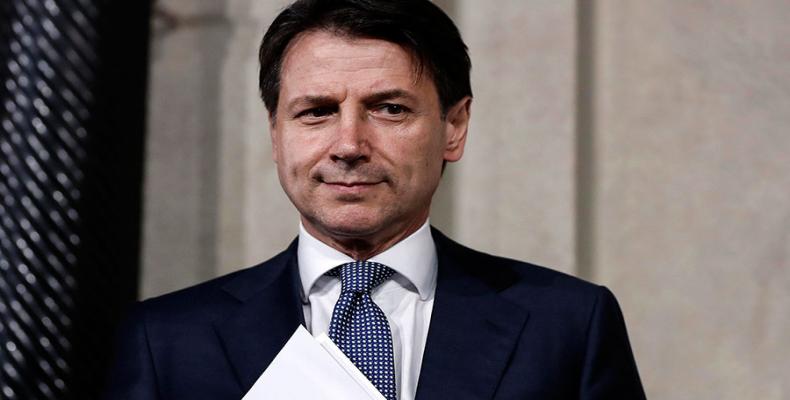 Rome, August 21 (RHC)-- Italy has been plunged into a political crisis as Prime Minister Giuseppe Conte announced he was resigning Tuesday.  He made the announcement after far-right Interior Minister and Deputy Prime Minister Matteo Salvini withdrew support for the right-wing populist coalition in power and called for a no-confidence vote.

Giuseppe Conte took aim at Salvini as he addressed Parliament yesterday.  Conte said: “It is clear who is the person responsible for the government crisis, but if they lack courage, the political courage, no problem, I will assume it.  I believe this is the only conclusion, the only necessary, transparent and coherent and linear conclusion.”

Conte then headed to the presidential palace to formally submit his resignation.  If a new majority coalition cannot be formed to run the government, the president will likely call for early elections. While political analysts say Salvini is unlikely to ascend to the premiership, the immigration hard-liner could gain more power as his popularity continues to grow.

In other news from Italy, migrants aboard a Spanish rescue ship disembarked on the Italian island of Lampedusa Tuesday, after an Italian prosecutor ordered authorities seize and evacuate the ship Tuesday, ending a nearly three-week standoff between Italy and the charity operating the vessel.

The Open Arms ship declared a state of “humanitarian emergency” over the weekend as around 100 migrants were stranded on the ship after Italy refused to grant them permission to dock.  Some passengers jumped overboard in recent days, including at least 15 people Tuesday, and attempted to swim to shore, before being picked up and returned to the vessel.