Former Sheriff Joe Arpaio, pardoned by Trump, is running for his old job 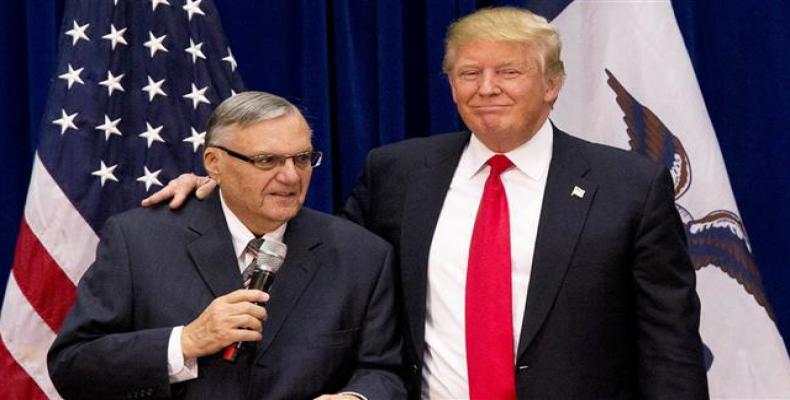 "Watch out world!  We are back!" 87 year-old Arpaio said in a statement in which he promised to reinstate the extreme measures that made him famous, like housing immigrants in outdoor tents in the 100-degrees-plus temperatures of the Phoenix area.

Arpaio was defeated for re-election to what would have been a record seventh term as sheriff in November 2016, shortly after he was charged with contempt of court for having ignored a federal judge's order to stop arresting immigrants solely on suspicion that they were in the country illegally.

Arpaio, who was one of the first elected officials to endorse Trump's presidential campaign, was convicted in July 2017. The next month, Trump pardoned him, saying he admired Arpaio's work "protecting the public from the scourges of crime and illegal immigration."

Arpaio reveled in his reputation as America's toughest sheriff, which led him to be the target of several civil rights lawsuits. He boasted that:

* He fed inmates only twice a day with a bland log called "Nutraloaf," which other prisons serve as a disciplinary measure.

* He subjected inmates to an in-house radio station that played patriotic music and opera for 20 hours a week. Arpio called the station KJOE.

* In 2008 and 2010, a federal judge ruled that Arpaio's jails violated the constitutional rights of inmates when it came to medical care.

Arpaio was also famous for housing prisoners in outdoor tents that he himself called concentration camps, where inmates complained that fans were inoperative and that their shoes melted.  He was reported to have responded to the complaints by saying: "It's 120 degrees in Iraq, and the soldiers are living in tents, and they didn't commit any crimes, so shut your mouths."

In his announcement on Sunday, Arpaio lamented that "the last four years have proven to be a time of lost opportunities to continue the kind of tough policing this county needs."-