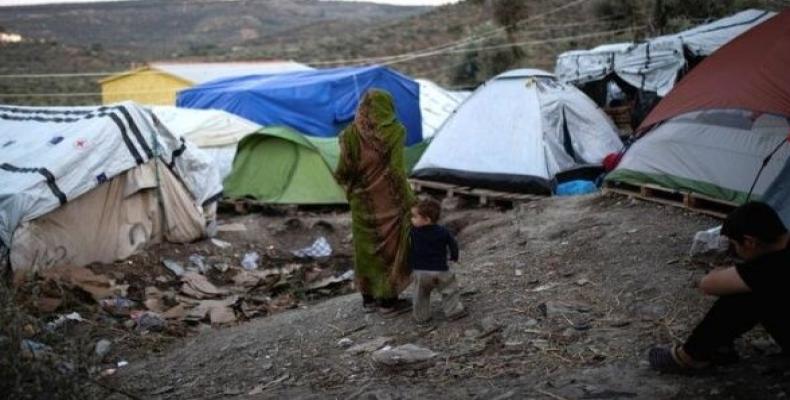 Athens, October 1 (RHC)-- After violent clashes over the weekend at the overcrowded Moria refugee camp in the Greek island of Lesbos, Greece’s government announced Monday it will clamp down on migration, in a series of measures set for 2020 which will include the deportation of around 10,000 asylum-seekers.

In a statement, the recently elected conservative government said it wants to return 10,000 migrants to Turkey by the end of 2020. That would increase the rate from the "1,805 returned in the 4.5 years under the previous (left-wing) Syriza government", it added.

About 24,000 asylum-seekers are stranded on Greek islands in “horrendous” conditions, according to charity Medecins Sans Frontieres (MSF). The five island camps have long struggled to accommodate the growing number of asylum-seekers.

“We are really going through a national crisis,” Deputy Citizen’s Protection Minister Lefteris Economou told reporters on Lesbos. Despite violence becoming a common occurrence, Sunday’s clashes were the most serious in many months, leaving a woman and child dead and dozens injured.

This comes as the country has been dealing with a resurgence in refugee and migrant flows in recent weeks from neighboring Turkey. Nearly a million refugees fleeing war in Syria and migrants crossed from Turkey to Greece’s islands since 2015.

Yet more than 9,000 people arrived in August, the highest number in the three years since the European Union and Ankara implemented a deal to shut off the Aegean migrant route. More than 8,000 people have arrived so far in September.

One of the most inadequate camps is Moria in Lesbos, which has grown into the size of a small town of at least 12,000 people, most of them Afghans, who are housed in a space designed for 3,000 in deteriorating living conditions.

Greek authorities affirmed that the country is now dealing with “a problem of migration, rather than a refugee problem”, citing the nationalities of new arrivals.

So as well as increasing deportations, the government decided at the cabinet meeting to tighten its borders and build what it called “closed centers” for undocumented migrants and rejected asylum-seekers who are to be deported, government spokesman Stelios Petsas reiterated.

While the International Rescue Committee (IRC) charity on Monday called on the government to immediately evacuate all vulnerable people, including unaccompanied children, who are currently holed up in Moria in unsanitary conditions with few toilets and showers and few doctors.
As of 2019, close to 900,000 asylum seekers in the European Union are waiting to have their claims processed, according to figures from the European statistics office.

“Living in limbo is now the norm for those seeking protection,” said Karl Kopp of Pro Asyl, Germany’s largest pro-immigration advocacy organization, adding that that “means living in the miserable Greek EU hotspots, or being trapped and pushed back at the borders. It means living in a desperate search for protection and human dignity.”