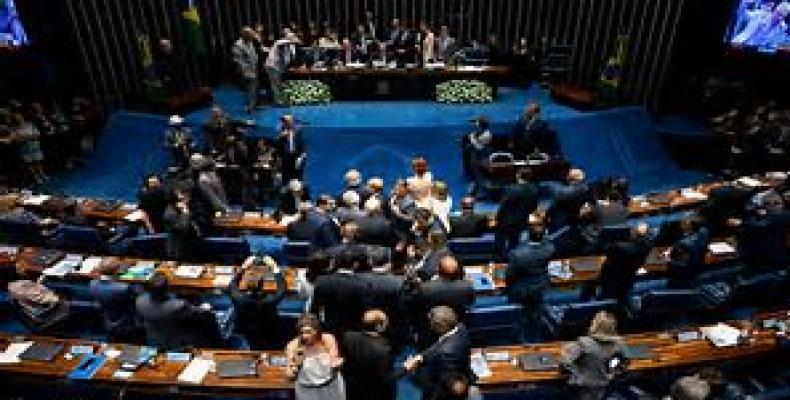 Brasilia, October 3 (RHC)-- The Brazilian Senate has approved the long-debated and controversial retirement reform project proposed by the government of President Jair Bolsonaro.  After nearly three hours of debate, 56 lawmakers backed the text, while 19 voted against it.  The bill requires a constitutional amendment, so 49 ‘yehs’ were necessary.

The initiative creates a new retirement minimum age requirement, 62 for women and 65 for men, with a minimum contribution of 30 and 35 years for each, respectively.  Currently, in the private sector, women can retire with 30 years of contributions and men with 35, regardless of their age.

The Brazilian president said he "regrets" the fallout the pension reform would create among the public, but argues the reforms will generate a $200,000 million in savings over the next decade, otherwise the country could "go bankrupt" within two years.

"The reform is necessary, if it is not done, Brazil runs out of money.  I am sorry, but it must be approved.  There is no other way," claimed the president to the press.  Senate president, Davi Alcolumbre, said the second and final vote must be made within the next two weeks.

The reforms have been protested by millions in Brazil since the changes were first proposed by the president’s minister of economics last February.  A general strike last June brought out millions of people across the country to protest against the reforms, and shut down transportation systems and oil refineries as major unions refused to work to show their opposition to the right-wing administration’s proposal.  Other strikes took place in August.

The government eventually had to concede to the demands that Brazil’s pension system remain under the state through contributions, rather than being privatized as is the case of the Chilean retirement system.