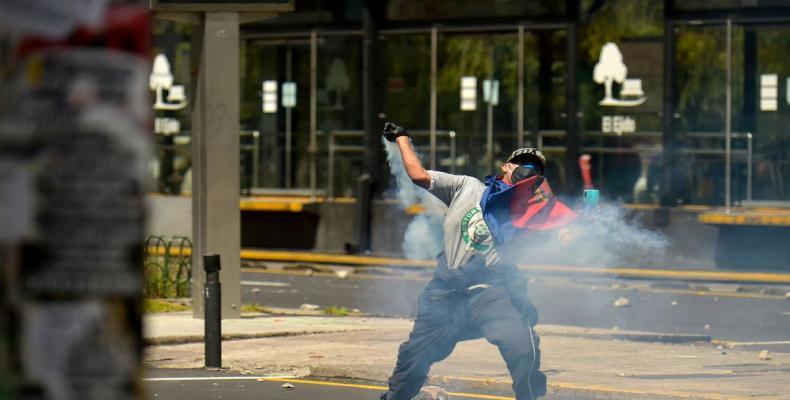 Quito, October 5 (RHC)-- Transportation union leaders announced Friday evening that they had "completed their goal" in relation to the now two-day strike across Ecuador, and were ending their work stoppage.

Freight, bus and taxi union leaders announced of Ecuador announced Friday at 6:40 p.m. local time that they were ending their part in a now two-day national strike.  Other civil society organization leaders say they will continue to take to the streets against President Lenin Moreno’s lengthy austerity measures that will be implemented this week as conditions of a March agreement for a loan with the International Monetary Fund (IMF).

During a press conference at a Quito hotel, president of the National Federation of Public Transport Cooperatives, Abel Gomez, announced Friday that the federation and 10 other transportation unions were ending what resulted in a two-day nationwide strike they began Thursday October 3rd in rejection of the government’s unilateral decision to reduce gas subsidies, increasing the price of diesel per gallon from US$1.00 to US$2.20 and the price of gasoline from $1.80 to $2.30 U$D per gallon.

Union leaders said they are ending the strike for “national economy” and because of reasons “that have nothing to do with our organizations.”  They asked national authorities to allow the immediate circulation of organization transportation workers throughout the country.

The communique went on to say that the union members have given their response to the government regarding decree 883 that does away with the gasoline subsidies.  "We handed over our petition and with that have completed our measures," Gomez declared to the press.

The representatives said they were leaving it to the administration to determine any potential public transportation rate hikes after the Minister of Transportation and Public Works, Gabriel Martinez, mentioned hours earlier that they would “find a balance in price since eliminating the diesel subsidy would impact fares."

The transport leaders also demanded the release of the transportation union leader, Jorge Calderon, who was taken into custody in Quito on Thursday.  Some 370 other protesters were arrested by authorities across the country between October 3rd and 4th.

Hours after the strike began on October 3rd, the government declared a state of exception, enabling it extra-constitutional rights to make arrests, among other provisions.  The measure was later extended for another 60 days.

Despite the transportation sector declaring an end to the strike, several other major social society organizations of Ecuador, such as the Confederation of National Indigenous of Ecuador (CONAIE), the Popular Front, and the United Workers Front (FUT), collectively announced they will continue to protest throughout the country against the IMF-induced adjustments that also include tax and labor reforms, and other proposals to flexibilize the nation’s economy.

President of CONAIE, Jaime Vargas announced Friday night in a joint press conference: "We call on presidents of communities, associations, nationalities and peoples of Ecuador take to the streets to claim our rights and reject the economic measures."

During one of the protests in Quito, Nelson Erazo, Popular Front leader, told Reuters: “Not even jail will stop the Ecuadorean people’s struggle.”  He added: “These will be days of unrest.”

The protests have been widespread and massive throughout the country, with thousands protesting in Cuenca and Riobamba, both in the highland region, as well as in the port city of Guayaquil. Main highways that stretch between Quito and Riobamba have been closed by demonstrators.

In addition, president of FUT, Messiah Tatamuez, called on international organizations and human rights defenders such as the Inter-American Court of Human Rights (IACHR) and the UN, to protect demonstrators, many of whom have been filmed arbitrarily being beaten by the National Police.

"We demand the right to protest and the physical integrity of our leaders … who fight for their rights," said the leader trade union leader.

At the press conference on Friday, Tatamuez spoke against what he called a "neoliberal project that the IMF and capitalism want to further implement in Ecuador."

The FUT leader called on "the workers of the countryside and the city, the students, the retirees" to a massive national strike Wednesday, October 9th "to combat the ‘Paquetazo’ that rewards the oligarchy and the IMF and takes away from the Ecuadorean people."

Moreno’s popularity has sunk to below 30 percent from above 70 percent after his 2017 election, however, he continues to have the support from the business elite and military.