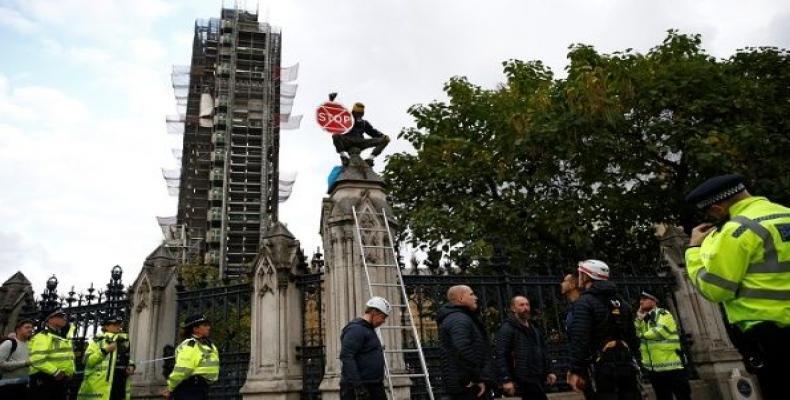 London, October 16 (RHC)-- British police have ordered a halt to Extinction Rebellion protests in London after a week of civil disobedience by climate change activists who have targeted government building and major financial institutions.

“Any assembly linked to the Extinction Rebellion ‘Autumn Uprising’... must now cease their protest(s) within London,” the police said in a statement.  Police said 1,445 people had been arrested in the protests so far this week.

Extinction Rebellion uses civil disobedience to highlight the risks posed by climate change and the accelerating loss of plant and animal species.

“The climate and ecological emergency isn’t going away and we remain resolute in facing it,” the group said in response to the police move. “We urge the government and the authorities to join us in doing the same. We cannot do it alone.”

Activists thronged the financial heart of London, unfurling banners, addressing passersby by megaphone or blocking streets around locations including BlackRock, the Bank of England, Bank of China and Barclays.

At BlackRock, volunteers glued themselves to the doors while others staged a mock dinner party with rolled-up banknotes on their plates. Police said they arrested more than 90 people.
The arrestees included Rabbi Jeffrey Newman of the Finchley Reform Synagogue, who was arrested near the Bank of England praying, singing and wearing a prayer shawl for the first day of the Jewish festival Sukkot, Extinction Rebellion said.

"The City of London is a preeminent nexus of power in the global system that is killing our world," said Carolina Rosa, spokesperson for Extinction Rebellion.