U.S. secretary of state claims Israel has the right to act in Syria 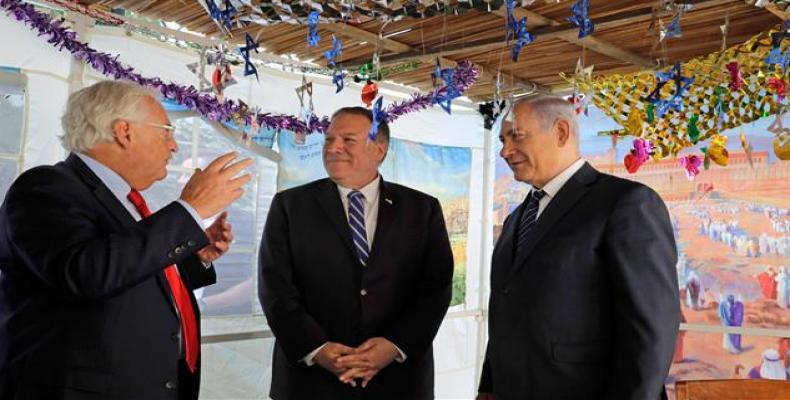 “Israel has the fundamental right to engage in activity that ensures the security of its people. It’s at the very core of what nation states not only have the right to do but an obligation to do,” Pompeo told The Jerusalem Post in an exclusive interview.

Pompeo made the interview shortly after completing a two-hour meeting with Israeli Prime Minister Benjamin Netanyahu to discuss developments in Syria and “the continued need to counter" what he called Iran’s destabilizing behavior in the region.

Israeli politicians are concerned that the U.S. pullout from Syria will further strengthen Iran’s position as a regional power at a time when Damascus is eliminating the last remnants of terrorists and reasserting control over all the country.

“I think the Israeli people should stare at the probably starkest change this administration has made in foreign policy vis-a-vis what the previous administration has done -- the toughest sanctions we’ve ever put" on Iran.  Sanctions that will be sufficient to decrease the scope and size of the Iranian economy by over 12% this next year.  That’s serious stuff,” Pompeo said.

Iranian military advisers have backed the national armies of Syria and Iraq in their fight against terror groups, many of which had the backing of the Israeli regime and certain Persian Gulf Arab regimes.   Iran played a key role in operations against Daesh, which lost by late 2017 all the territories it had seized in Iraq and Syria.

Pompeo said: “If you look at our strategy, America is committed to countering the threat from Iran.  We view it as the fundamental destabilizing force inside the Middle East and we are determined to push back against that."

Iraq and Syria have been expanding political and economic ties with Iran as they seek assistance in the post-war reconstruction of their countries which had large swathes of their territories overrun by foreign-backed terrorist outfits in the past years.

The US, however, has been engaged in a military campaign seeking to counter the emerging regional alliance and Pompeo was effusive in his accusations to justify it.  “We know this is a corner where Iran has attempted to move weapon systems across into Syria, into Lebanon, that threatens Israel and we are going to do everything we can to make sure we have the capacity to identify those so that we can collectively respond appropriately.”

Pompeo's Friday interview came following the withdrawal of US troops from northeastern Syria amid an ongoing Turkish offensive in the region, which is currently halted following a deal between Ankara and Washington.

In the interview, the U.S. secretary of state dismissed criticism of the deal with Turkey, claiming it would “save lives” and saying Israel has nothing to worry about.  Pompeo said Washington would stand by the Tel Aviv regime in the event of future conflicts.  “There is no risk of that,” Pompeo said, calling U.S.-Israeli relations "strong, deep and growing."

Turkey launched its invasion of northeastern Syria after securing a green light from U.S. President Donald Trump.  According to the UN, more than 100,000 people have fled their homes in north Syria since the attack began.  Fears are also growing that thousands of Daesh terrorists may escape from jails as Kurdish prison guards are reportedly leaving their posts.

On Tuesday, a senior Iraqi security expert said Washington is attempting to transfer 3,000 members of the Daesh terrorist group from Syria to Iraq.  Hafez al-Basharah told the Arabic-language al-Ma’aloumeh news website that the U.S. is plotting to create a safe area for Daesh members in Iraq.

The Arabic-language media outlets had reported in July that Washington planned to bring back a more dangerous version of Daesh to Iraq and Syria after its failure to achieve its goals in the region.