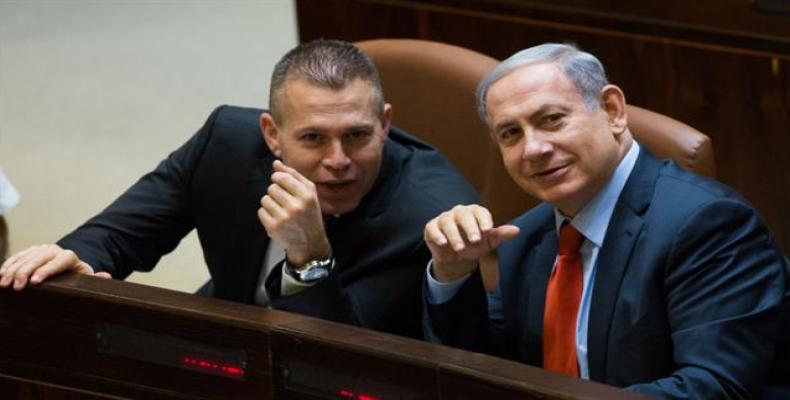 Tel Aviv, July 6 (RHC)-- An Israeli minister has warned Damascus that Israel could strike Syrian government troops if they are stationed in a border zone subjected to a UN demilitarization agreement, a few days after Tel Aviv announced that it had beefed up its military presence in the occupied Golan Heights near the Syrian border.

“We must verify and do everything to clarify vis-a-vis the Russians and [Syrian President Bashar al-] Assad’s government, that we will not accept any armed presence by the Assad regime in the areas which are meant to be demilitarized,” said Gilad Erdan, the regime’s public security minister, in an interview with the Israeli news website Ynet.

In 1967, the Israeli regime waged a full-scale war against Arab territories, including those of Syria, occupied a large swathe of Syria’s Golan Heights and annexed it four years later, a move never recognized by the international community.

In 1973, another war, known as the Arab-Israeli War or the Yom Kippur War, broke out between the Israeli regime and a coalition of Arab states led by Egypt and Syria. A year later, a United Nations-brokered ceasefire came into force, according to which the Israeli regime and the Syrian government agreed to separate their troops, and create a buffer zone patrolled by the UN Disengagement and Observer Force (UNDOF).

Erdan’s comments came as Syrian government troops have managed to liberate a string of towns and villages in the southern and southwestern regions of the country from the clutches of militant outfits in recent weeks.  Syria, which has been gripped by foreign-backed militancy since March 2011, has said that the Israeli regime and its Western and regional allies have been aiding Takfiri terrorist groups.

The Daesh Takfiri terrorist group, which once held large swathes of land in Syria, is no longer in control of any urban center.  Following its crushing defeat against Syrian government forces late last year, the terror outfit is only active through its remnants, sparsely based in some rural areas.  Other Takfiri groups are either significantly weakened or increasingly losing ground to advancing government troops.

The Syrian government also strongly seeks to take back its share of the mountainous plateau of the Golan Heights from the Israeli regime.

Israel says it has beefed up its military presence in the occupied Golan Heights near Syria.  When asked if the Israeli regime was prepared to take military action against the Syrian army, Erdan said: “Unequivocally, yes,” citing Israeli air strikes conducted in recent months against positions held by the Syrian troops.

Over the past few years, Israel has frequently attacked military targets in Syria in what is considered an attempt to prop up terrorist groups that have been suffering heavy defeats against Syrian government forces.  It has also been providing weapons to anti-Damascus militants as well as medical treatment to Takfiri elements wounded in Syria.

“Here, too, if there is a violation, and certainly in the southern Syrian region which is close to” the Israeli settlements, “and a bringing of weaponry that should not be there, Israel will take action,” Erdan added.

Late last week, Israeli Prime Minister Benjamin Netanyahu, alluding to the so-called truce, told the Israeli cabinet that “we will demand strict adherence to the 1974 disengagement deals with the Syrian army.”  He also said that he was in constant contact with Washington and Moscow on the matter.

In a statement, the Israeli military said that it had deployed artillery and armored reinforcements to the occupied mountainous plateau, saying the move was the result of a situation assessment “in light of developments on the Syrian Golan Heights.”