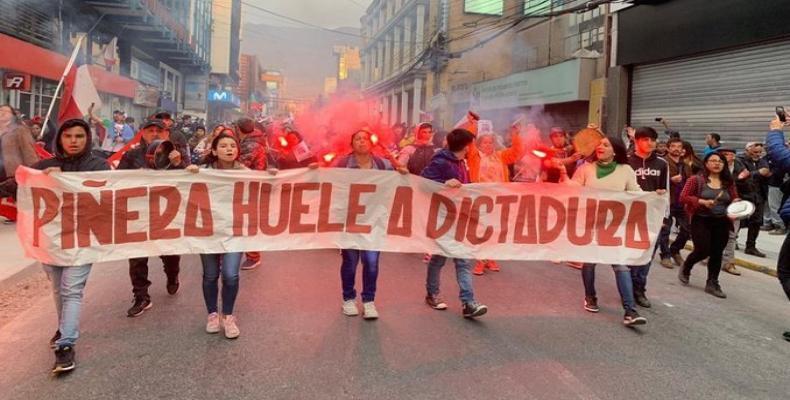 Santiago de Chile, October 29 (RHC)-- Thousands of Chileans poured into the streets of Santiago on Tuesday, shutting down main boulevards in a sign that government promises of reform continue to fall short.

The demand that is being raised is that the entire government resign -- including President Sebastian Piñera -- and the convocation of a National Assembly in order to change the Constitution of the country.

Anti-riot police in armored trucks clashed again with the gathering masses as they were marching towards the Presidential Palace, throwing paper planes as a symbolic gesture to reject the neo-liberal reforms.

A member of the National Institute of Human Rights of Chile was reported injured, after receiving six bullets by the anti-riot police officers, and was transferred to a hospital.

The popular rejection of the Chilean political elite continues to expand as over 2,500 workers from the mining company Escondida, the world's largest copper deposit, begin a 24-hour strike today.

Besides supporting those in Santiago de Chile protesting against "economic and social policies that affect the vast majority of the Chilean society," mine-workers called for political parties to reach a deal to "achieve a fair social pact, through a constituent process, as the only way to overcome the crisis."

In the last 24 hours, in turn, looting of shopping centers and fires in government offices have been reported in several Chilean cities.

The situation is critical.  According to the National Institute of Human Rights (NHRI), 3,535 detainees, 1,132 injured, 43 abused children and 19 sexual violence complaints were reported until Monday night.​​​​​​

These instances of state terrorism, however, would not seem enough to the Latin American far-right, which looks with concern at the growing popular mobilization.

“Today Piñera is a coward.  He pulled out the troops but with restraints.  He should have allowed the Constitution-based repression against subversion and chaos to be executed in depth so as to pacify the country, instead of humiliating his Cabinet and offering social reforms,“ Hugo Guerra wrote at the Peruvian outlet Expreso.

Meanwhile, in the United Kingdom, 15 British lawmakers introduced a motion to the House of Commons to condemn human rights violations in Chile.  The motion ask the House to recognize that the “national uprising has its roots in three decades of increasing economic inequality in Chile” and to “condemn President Piñera's declaration that the Chilean government is at war with the protesters.”

The British parliamentarians also call on the U.K. Government "to use all diplomatic and international means at its disposal to assist in a peaceful resolution to the ongoing protests."