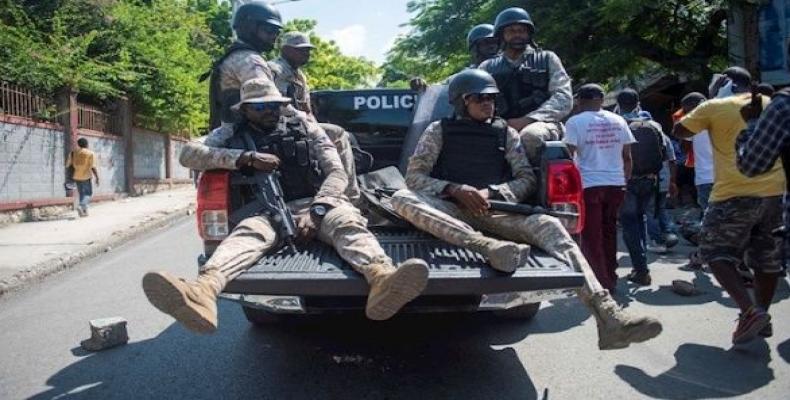 United Nations, November 2 (RHC)-- The Office of the United Nations High Commissioner for Human Rights (OHCHR) reported that 42 people have died and 86 have been injured during protests that paralyze Haiti since mid-September.

"The vast majority suffered gunshot wounds. Reports indicate that security forces were responsible for 19 of the deaths while the rest were killed by armed individuals or unknown perpetrators," the OHCHR reported.  The UN agency mentioned also that one journalist was killed, nine other were injured and many have reportedly been threatened.

International human rights organizations have also called on President Jovenel Moise to control the Haitian security forces, which have been accused of using unlawful and excessive force.

There are several videos of incidents of the National Police using weapons “indiscriminately and unlawfully, including launching tear gas out of a moving vehicle... firing on protesters with less-lethal ammunition at extremely close-range and beating a protest,” as WRLN reported.

The OHCHR spokesperson Marta Hurtado denounced the “alarmingly high number of detainees in prolonged pre-trial detention has increased due to the closure of many local courts."

In Haiti, the first mass protests began 16 months ago when the population expressed dissatisfaction with food prices hikes and government corruption.  To these reasons of discontent is now added the poor performance of President Jovenel Moise and the inconvenience caused by the fuel shortages since mid-September.

On Wednesday hundreds of doctors, nurses and health workers marched to demand what the majority of the population incessantly requests: the resignation of President Moise.  They also requested a change in the health system, better working conditions and a salary increase for public hospital employees.

The international problems that the Haitian economic and political situation could bring about have not gone unnoticed.  In the Dominican Republic, a Spanish speaking country that shares the Hispaniola island with Haiti, Defense Minister Rubin Paulino Sem on Thursday sent 600 additional soldiers to the border.

"The Army has employed troops, drones, aircraft and all-terrain vehicles to keep surveillance and control at the land border, in prevention of a possible stampede of Haitians fleeing the riots," local outlet Acento reported.

Currently, the Dominican Republic maintains 9,100 soldiers permanently on its land border with Haiti.