Venezuela signs agreement with Iran in medical sector amid sanctions 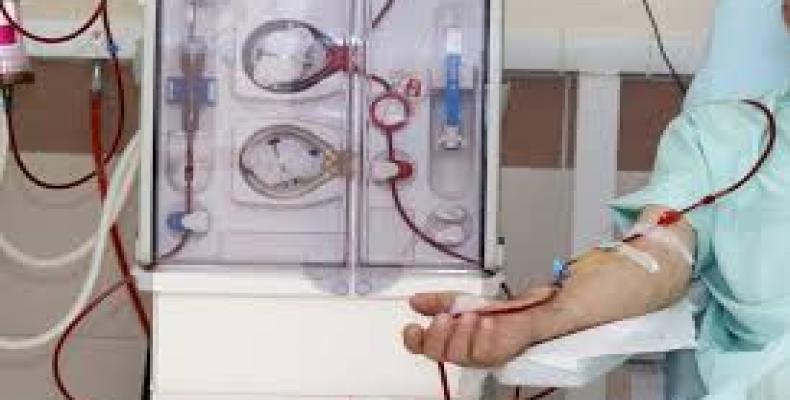 Tehran, November 3 (RHC)-- The Venezuelan science minister has paid a visit to Iran’s Science and Technology Park in Tehran to buy medical equipment from Iran amid the U.S. sanctions on both countries.

These dialysis machines are made from A to Z in Iran.  This is according to the authorities of Pardis science and technology Park, which is known as Iran’s Silicon Valley, housing top Iranian science-based firms.

In a tour around the Park, visiting Venezuelan Science Minister Gabriela Jimenez made an order to buy a hundred Iranian-made dialysis machines among other equipment in a bid to lay the groundwork for stronger ties between Caracas and Tehran in the medical sector.

During her tour, the Venezuelan science minister visited two other major firms. This one produces oral and maxillofacial surgical devices, which has obviated the need for imports of similar foreign counterparts.

The other company produces Atomic Force Microscopes, which deliver very-high-resolution images on the order of fractions of a nanometer, more than 1000 times clearer than ordinary microscopes and are used in force measurement and imaging.

Iran's advances in the medical sector have not been achieved effortlessly. The main challenge, which still casts its shadow over the medical industry, is the US sanctions that have made it nearly impossible for Iran to buy life-saving medicine from other countries.

There are no sanctions directly imposed on Iran’s medical sector, but the US-led sanctions on Iran’s banking system [have] not excluded the trade of pharmaceutics and medical equipment, affecting 30 illnesses, such as cancer, cardiovascular diseases, thalassemia and multiple sclerosis.

Human Rights Watch reports that the Trump Administration’s sanctions on Iran [have] drastically constrained the imports of vital medicine to Iran, causing serious hardships for ordinary Iranians and threatening their right to health.  But Iran has not remained idle. The very challenge has acted as a drive, pushing Iran to discover its capabilities.

As the sanctions on Iran grow deeper, the country is laying the remaining bricks of self-sufficiency in the medical sector. The rise in the number of health tourists visiting Iran for medication is one indicator that shows the progress. Only last year, Iran made over 1 billion U.S. dollars out of its health tourism.

At the same time, Iran denounces Washington's sanctions as inhumane, calling for the world bodies to pressure the U.S. to exclude humanitarian commodities from its list of embargoes.