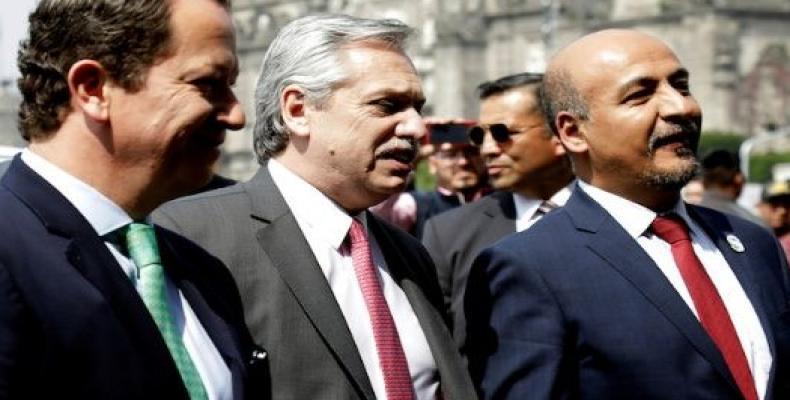 Fernandez is currently on a visit to Mexico and started his trip with an 80-minute private meeting with his Mexican counterpart in the National Palace.  The meeting was not part of any ceremony or protocol, since Fernandez has not officially started his presidential term yet.

"We will improve our economic and commercial relations," said Lopez Obrador at a regular government news briefing.  "There's a lot we can do, and a lot we can do to support each other," he added in reference to the current social and economic crisis in Argentina.

Alberto Fernández, for his part, said they discussed the importation of meat and other local products from Argentina to Mexico, where there is great demand.  In addition, the elected president and López Obrador spoke about Mexican plans for young people who do not work or study, to evaluate the possibility of implementing something similar in Argentina.

"They have no idea the joy that this meeting has given me.  We have very similar ideas.  And López Obrador knows very well what is happening in our country."  He also said that President López Obrador promised to help "Argentina as much as possible."

During the electoral campaign, Argentina's economy took center stage with the country in the grip of recession for most of the last year, the outlook for growth darkening, annual inflation over 50 percent, job numbers down and poverty up sharply.

The leaders of Mexico and Argentina expressed their concern about the problems facing the Latin American continent, before the massive protests in Ecuador and Chile against the economic policies of their governments.  Fernández said they agreed on the need to "find a political model that returns balance and equality in Latin America."

"Nobody wants Latin America to have experiences like the ones Chile is having right now.  We have to help it recover the peace, and I will do everything I can do," he said.