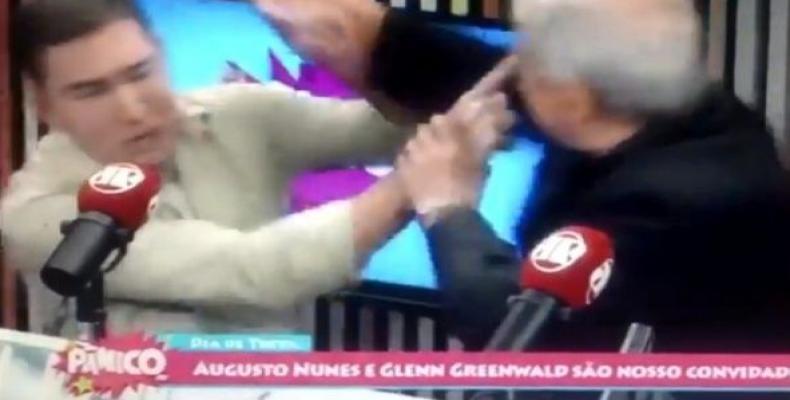 "We have a lot of political differences.  I have no problem being criticized for my work.  I criticize him, too, but what he did was the ugliest and dirtiest thing I've ever seen in my career as a journalist," Greenwald said of Nunes' comments during the show.

The U.S. journalist explained in a tweet that he agreed to do a live interview in the right-wing radio show Panico on Thursday to challenge Nunes’ accusations that he and his husband, Brazilian lawmaker David Miranda, are not properly caring and neglecting their two adopted Brazilian children.

Miranda is a Brazilian politician representing the state of Rio de Janeiro in the Chamber of Deputies.  During the live broadcast, ​Greenwald responded by repeatedly calling Nunes a coward for targeting his family, until Nunes threw a punch at Greenwald but missed, then as the fight escalated slapped Greenwald in the face.

“I think what’s most important is that the Bolsonaro movement, including the president’s son and his mentor and many members of Congress of his party, are applauding this violence because it’s a fascist movement. They want a civil war, they want violence in our political discourse, and that’s what makes them so dangerous,” Greenwald said in a video explaining the events.

The persecution and harassment come as The Intercept Brazil published on June 9 an extensive and hard-hitting exposé on the political motivations behind Operation Car Wash against former president Luiz Inacio Lula da Silva and the unethical involvement of the current Supreme Minister of Justice Sergio Moro and state prosecutor Deltan Dallagnol.

The documents were released in a three-part series where, based on leaked documents and Telegram messages between prosecutors and Moro, it shows the “apolitical” and “unbiased” team spent hours internally plotting how to prevent the return to power by Lula and his party. As well as the lack of hard and documented evidence to establish a case against the former head of state.

Following the release of the leaked info, Greenwald has been persecuted by the country's far-right politicians and officials have threatened to take imprison or deport him.

On July 11, the leftist party 'Sustainability Network' filed an action with the Federal Supreme Court to suspend any judicial or administrative action that could affect the rights of the U.S. journalist.

This protective action was a response to the fact that the Federal Police had previously asked the Financial Activities Control Board (COAF) for information on Greenwald's banking records to investigate alleged criminal activities.

Yet this is not the first time Greenwald or his family have been the target of attacks by pro-Bolsonaro supporters.  Back in August, a blogger named Oswaldo Eustaquio questioned the terminal cancer Greenwald’s mother is suffering from and wrote on his Twitter account that the journalist lied about his mother’s health situation.