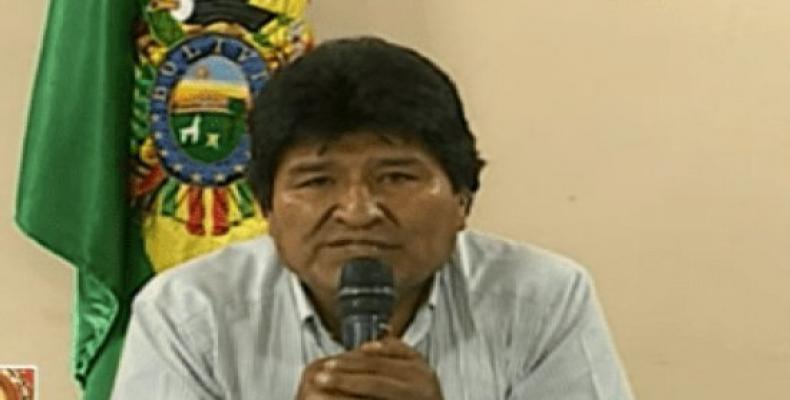 La Paz, November 10 (RHC)-- Bolivian President Evo Morales was forced to resign Sunday after senior army officials withdrew their support and called on him to abandon his post.  The move came amid a wave of violence perpetrated by right-wing and fascist opposition groups.

“I decided to resign from my position so that Carlos Mesa and Luis Camacho stop abusing and harming thousands of brothers and sisters.  I have the obligation to seek peace and it hurts a lot that we confront Bolivians.   So, for this reason, I will send my letter of resignation to the Plurinational Assembly of Bolivia.”

Bolivian Vice President Alvaro Garcia Linera also said that he was resigning from his position. The two leaders said that they both would be handing their resignation letters to the country's National Assembly.

Evo Morales and Alvaro Garcia Linera said they will stay in Chimore in the central Department of Cochabamba to work with the people.  "We will come back and we will be millions as Tupac Amaru II said," Morales declared.

The resignation comes after Evo Morales proposed a dialogue process with the opposition parties but was rejected and even accepted the Organization of American States’ (OAS) call for new elections.

However, due to strong violent onslaughts against militants and leaders of the Movement Toward Socialism (MAS), intimidation of journalists, burning of residences and betrayal of political allies and members of the National Police, Morales and his vice president decided to leave the government in order to prevent more violence.

In an interview with teleSUR's correspondent in Bolivia Freddy Morales, just hours before his resignation, Evo Morales said the decision to call new elections was to preserve the peace in Bolivia "so that we do not confront the Bolivian family," while calling on the opposition protesters to end the strikes and remove roadblocks in order to not harm the economy of the country.