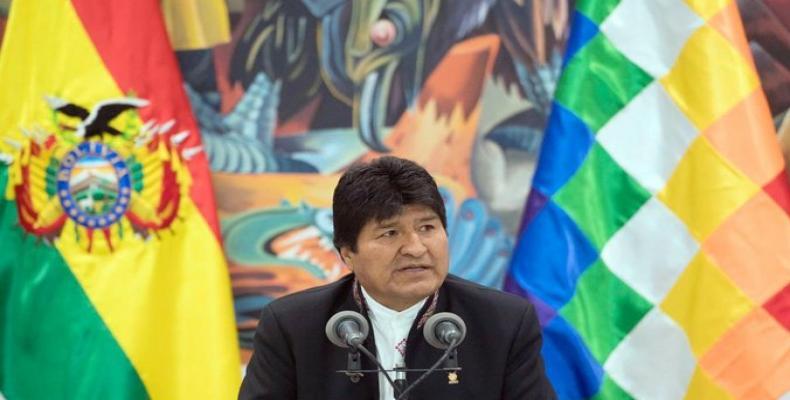 La Paz, October 23 (RHC)-- Bolivian President Evo Morales gave a press conference early Wednesday morning in which he warned that a right-wing coup attempt is being carried out in an attempt to stop the full counting of votes and annul the result of Sunday's elections if it gives Morales a first-round victory.

“A coup is underway, carried out by the right-wing with foreign support.  What are the methods of this coup attempt?  They’re not recognizing or waiting for election results, they’re burning down electoral courts, they want to proclaim the second-place candidate as the winner,” Evo Morales told journalists assembled.

Morales pointed to the fact he is in first place and reiterated his victory.   He said: "We are just waiting for the electoral court to report the results.   I'm nearly certain that with the vote of the rural areas that we will win in the first round, even though the preliminary results show that we’ve won, but we are respectful and will wait for the official results from the electoral court.  I say to the international press, our victories have always been with the rural vote.”

Evo Morales also thanked the Bolivian people for giving his ‘Movement Towards Socialism’ party majority in the legislature, though pointing out that his party has so far fallen short of a two-thirds supermajority.

Anti-government right-wing protests turned violent Monday with numerous violent attacks took place across the country as preliminary results indicated that leftist President Evo Morales is on course for a first-round victory.  Attacks included the burning down of vote counting centers and assaulting Indigenous supporters of Morales.

The first such action was in the city of Sucre, an opposition stronghold, where rioters set fire to the regional electoral authority. Elsewhere in the country, government buildings were attacked in Tarija, Oruro, the campaign headquarters of Morales’ party were vandalized.

In Cochabamba, where Morales is leading the vote, protesters attempted to seize control of the Campo Ferial, which is the hall in which the votes were being counted.

The president stressed that a key tactic of the right-wing who are plotting a coup is to not recognize the Indigenous vote, which largely favors Morales.

“I understand the desperation.  They don’t want to recognize my victory, they don't recognize the Indigenous vote, just like in the past.  We are all humans, we are all part of the Bolivian family, we can have ideological differences, but to sow hate against the Indigenous and not recognise their vote is just racism,” he added.

To defeat the coup, Morales echoed the call from social movements of the CONALCAM who yesterday declared a state of emergency and peaceful mobilization to defend democracy from right-wing violence.