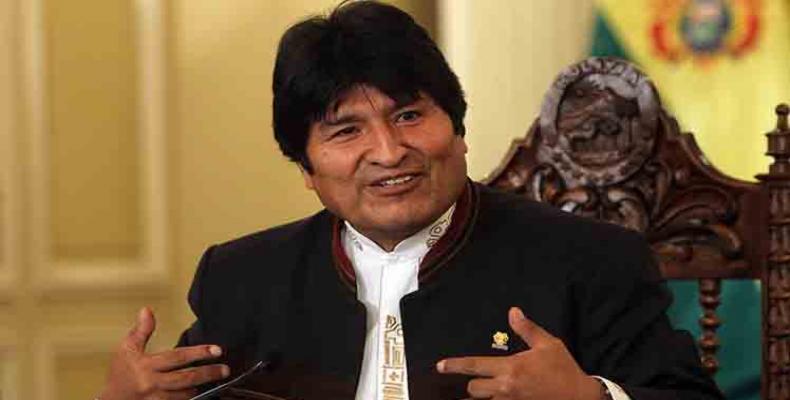 La Paz, September 18 (RHC)-- An opinion poll published by the private Bolivian TV channel UNITEL, shows that leftist President Evo Morales has opened up a huge lead against right-wing candidate Carlos Mesa, ahead of upcoming elections on October 20th.  The poll also showed that support for Morales has increased in the last month, meaning that if the election were to be held today, Morales would achieve a first-round victory.

UNITEL published the results of their poll on Monday evening which gave Morales 43.2 percent, against 21.3 percent against Carlos Mesa, and 11.7 percent for Oscar Ortiz.  Compared to a month ago, the figures show an increase of 4 percent for Morales, and a decrease of 0.7 percent for neoliberal candidate Mesa.

Under Bolivian law, this would mean that Morales would win in the first round because only 40 percent is needed if the second-place candidate is more than 10 points behind.   Morales’s largest lead is in the department of La Paz, where the poll shows him winning 56.1 percent, against just 18.2 percent for Carlos Mesa. Evo Morales and his ‘Movement Towards Socialism’ (MAS) party is projected to win in 6 of the country’s 9 departments.  The areas where Mesa is ahead is in the departments of Tarija, Beni and Chuquisaca where he is expected to win with 35.1 percent, 34 percent and 27 percent, respectively.

The poll covers urban and rural areas and has a margin of error of 2.1 percent.  However, a number of international media outlets have instead reported on a poll that gives Morales a lead of just 7 percent, despite the fact that Bolivia’s electoral authorities have ruled the poll to be illegitimate due to a number of irregularities, including a margin of error that is too large for official guidelines, and a failure to report who financed the survey.

A buoyant economy is likely to ensure Morales’ popularity.  The country is the fastest growing economy in the region, the government says that this is due to Bolivia’s economic model that rejected neoliberal measures, and instead nationalized natural resources and strategic industries, the profits from which are then reinvested into the economy.

Nevertheless, discontent lingers in the country’s wealthier and whiter eastern regions. In the city of Santa Cruz on Saturday, mobs belonging to the fascist ‘Cruceñista Youth Union’ vandalised a MAS campaign headquarters, and attacked a free health clinic that was in the same building.

Morales condemned the actions saying “Violence sponsored by right-wing groups threatens the social peace necessary for democracy. The acts of vandalism by 21F aggressors are an affront to the solidarity, hardworking and peaceful spirit of the people of Santa Cruz”

The groups responsible for the violence are the same groups which Wikileaks revealed had received millions in grants from the U.S. government during the ‘media luna’ coup in 2008/9 when they led movements for autonomy and independence from the Bolivian state.