More than 4,000 Twitter accounts created to legitimize coup in Bolivia 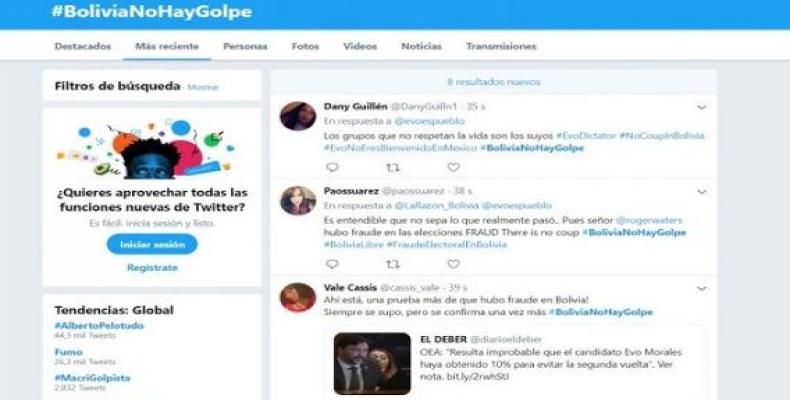 La Paz, November 14 (RHC)-- It's becoming more and more clear the role of social media as yet another political party able to legitimize or remove any Government, especially through social networks.  A few days after the consummated coup against Bolivian President Evo Morales, there have been more than 4,500 new Twitter accounts created, without almost any followers, with the hashtag #BoliviaNoHayGolpe installed.

Luciano Galup, director of the Menta Communication consultancy, was the one who announced that there were thousands of messages against the figure of Evo Morales from accounts that had almost no followers.  He acknowledged that as a result of an effervescent society which in the face of a crisis may want to participate in the debate, some of these accounts could, in fact, be genuine.

However, Galup expressed that the majority had been created to install a sense of democratic disruption in Bolivia worldwide.  "These types of coordinated actions do not have much impact on domestic politics.  A Trending Topic has no effectiveness on people who live those experiences and occupy those territories.  But worldwide they can function as propaganda," Galup explained to Argentinian media outlet Pagina 12.

For the analyst, the campaign in networks against Evo aims to legitimize the coup and wash the face of the incoming illegitimate government.  "Dictatorships and coups need to legitimize themselves against the concert of nations because there may be sanctions.  It works like a foreign policy, not a domestic one," he said.

According to Galup, there are 3,612 accounts that participated in #BoliviaNoHayGolpe and have between zero and one follower.  And the most scandalous thing is there are 4,492 accounts that were created between yesterday and today to participate in the HT.  They created more than 4,000 accounts in two days.

Since Sunday the images illustrating the coup in Bolivia have flooded the Internet: Evo announcing his resignation to avoid an escalation of violence, Fernando Camacho entering Palacio Quemado with a Bible and a rosary, fires and looting of the houses belonging to the leaders of the Movimiento al Socialismo (MAS), mobilizations in the streets for and against of the coup, senator Jeanine Añez demanding the Armed Forces to intervene to "prevent a bloodshed," Peru preventing the plane that took Evo to Mexico from flying over its territory, prisoners rioted in the most important prison in La Paz.

"When countries acquire relevance from their conflicts, their meaning is disputed at the global level. The Bolivian case is particular because it has the characteristics of a traditional coup d'etat, with the Armed Forces asking a president to resign, so it has a lack of legitimacy of origin that forces it to have to defend what is happening internationally," Galup explained.

With hashtags such as #EvoAsesino, #EvoDictador or #EvoEsFraude, the messages of these accounts denounced that the first indigenous president is a corrupt and accused him of having "stolen" the October elections, as well as celebrating the presidency of Jeanine Añez and declaring that the coup finally led to "democracy and freedom" to the Bolivian people.