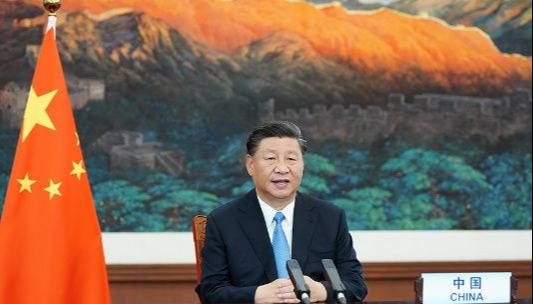 China ratified its cooperation with the UN and its agencies. (Photo: Twitter @IramsyteleSUR)

United Nations, September 22 (RHC)-- China's President Xi Jinping ratified this Tuesday the Asian giant's contribution to research and treatment of COVID-19, particularly in the search for an effective vaccine candidate, which he promised for international distribution.

He also rejected any "attempt at politicization" or "stigmatization" around the COVID-19 pandemic, minutes after his U.S. counterpart, Donald Trump, called for holding Beijing accountable for "infecting the world" with COVID-19, during the high-level meeting of the UN General Assembly (UNGA) general debate.

Beginning his speech, the Chinese leader recalled the 75th anniversary of the end of World War II IN 1945 and drew a parallel between the efforts that led to the defeat of fascism then and the efforts of humanity now to fight the COVID-19 pandemic.

Xi Jinping expressed that "the virus will be defeated.  Humanity will win this battle."  The Chinese president called for international cooperation to confront the pandemic, stressing that the response to the disease must be "guided by science" and giving a key role to the World Health Organization (WHO), much criticized, shortly before, by Donald Trump.

On the other hand, the Chinese leader assured that his country is not going to maintain any kind of war -- "neither cold nor hot" -- despite the strong tensions it is experiencing with the United States.

The head of state stressed that China will never seek "hegemony" and insisted on a world based on cooperation and multilateralism.