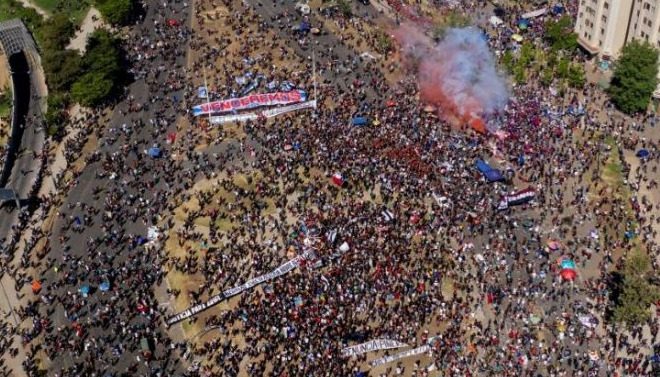 Commemoration in Santiago de Chile on the first anniversary of the social revolt.  (Photo: AFP)

Santiago de Chile, October 18 (RHC)-- The central Plaza Italia in Santiago de Chile was filled this Sunday by tens of thousands of people to commemorate one year since the beginning of the social protests in Chile to demand greater social equality.

Groups of protesters began to arrive early in the morning and tens of thousands of people gathered at the plaza, which became the epicenter of the protests that erupted on October 18, 2019.

Mostly young people, but also families and older people came to the square, renamed by the protesters as "Plaza de la Dignidad" (Dignity Square), to commemorate the day when "Chile woke up," but also to meet again in a massive protest after months when the pandemic imposed a pause in the Chilean demonstrations.

The demonstration takes place one week before the historic plebiscite that will consult Chileans on whether or not to change the Constitution inherited from the Augusto Pinochet dictatorship (1973-1990), one of the biggest victories of the social movement that emerged in the streets of Chile just one year ago.