Leaders and organizations around the world welcome MAS victory in Bolivia 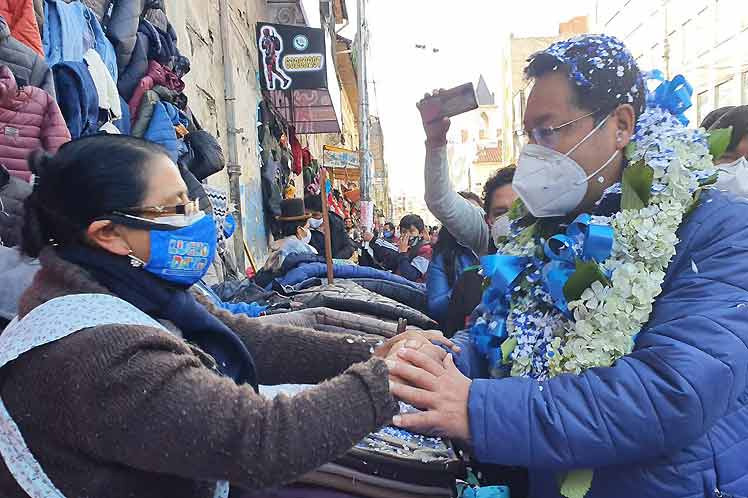 La Paz, October 19 (RHC)-- Government leaders, representatives of political parties and social organizations around the world have welcomed the victory of the Movement Toward Socialism in Bolivia's presidential elections on Sunday.

In a message published on the social network Twitter, Mexican President Andrés Manuel López Obrador praised this result and congratulated the Bolivian people for resolving the country's conflicts through peaceful and democratic means.  He also greeted the social organizations, native peoples, former president Evo Morales and the Movement Towards Socialism.

For his part, the President of Nicaragua, Daniel Ortega, and Vice President Rosario Murillo, extended their greetings to the representative of MAS.  "We congratulate each brother and sister of this noble and great people of Tupac Katari, the people of the first indigenous president of the Americas, our dear compañero Evo Morales.

The Confederation of Indigenous Nationalities of Ecuador (Conaie) saluted the victory of the Movement Toward Socialism (MAS) for the victory of Luis Arce, the president-elect of Bolivia, and said that the country is preparing to deepen its revolution.

"The Conaie salutes the brotherly Bolivian people and recognizes its resounding triumph in the general elections of this Sunday, October 18th, which, after a year of being governed by the economic elites and the Bolivian right wing (...) has decided the beginning of a new stage," said the Conaie in a statement.

The Ecuadorean indigenous organization added that the Bolivian people are preparing to deepen their revolution from the grassroots, and therefore called for "the consolidation of true Latin American unity that focuses on the realization of common political projects and that deepens real changes, for the respect of life, human rights, self-determination and autonomy of States and indigenous peoples."

The Community of Latin American and Caribbean States (CELAC) invited the newly-elected government of Bolivia, led by Luis Arce, to "reactivate its participation" in the regional body, once it takes office.

"CELAC reiterates its invitation to the new government of Bolivia to reactivate its participation once it takes office and with it continue strengthening Latin American and Caribbean integration," expressed the pro tempore presidency of the community, held by Mexico, on its Twitter account.