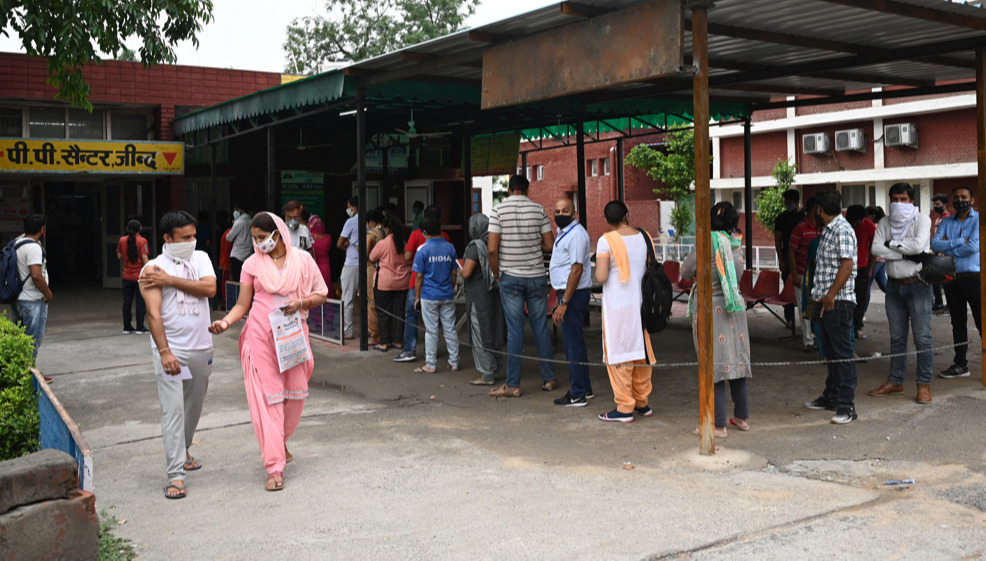 People stand in a queue as they wait to get a dose of the Covishield at a civil hospital in Jind, in the northern state of Haryana, India on June 1, 2021. (Photo: AFP)

Washington, June 2 (RHC)-- Millions of people are losing their lives with no access to vaccines in poor countries, while rich countries are sitting on large caches of surplus vaccines, and refusing to share them.  The dire situation has prompted a call by several leading organizations for world leaders to make a “new commitment" to a more equal distribution of coronavirus vaccines.

In a letter, published on the Washington Post on Tuesday, the heads of the World Health Organization (WHO), World Bank, International Monetary Fund (IMF) and World Trade Organization (WTO) said that bringing the pandemic to an end "requires global action now."

“It has become abundantly clear that there will be no broad-based recovery from the COVID-19 pandemic without an end to the health crisis,” they said. “Access to vaccination is key to both."  The joint op-ed called on the Group of Seven wealthy countries (G7) to agree on a "stepped-up coordinated strategy, backed by new financing, to vaccinate the world.”  The leaders of the G-7 are due to hold a summit in the United Kingdom later this month.

The joint letter recommended that the G7 agree to fund a $50 billion plan already put forward by the IMF to accelerate the end of the pandemic.  The G-7 leaders met in central London last month, and committed to financially support UN-backed program Covax, but there was no immediate announcement on fresh funding to improve access to vaccines.

Back in March, the WHO warned against vaccine inequality, which it described as "grotesque,” calling on vaccine-wealthy nations to refrain from giving shots to children and adolescents and instead donate those doses to other nations.

The WHO said only 14 out of 21 countries in the Eastern Mediterranean region (EMRO), which extends from Morocco to Afghanistan, have received inoculations, equivalent to little more than one percent of the population of the entire region.

In the meantime, the United States has purchased 200 million more vaccines for its own citizens, pushing poorer countries and vulnerable populations to the back of the queue.