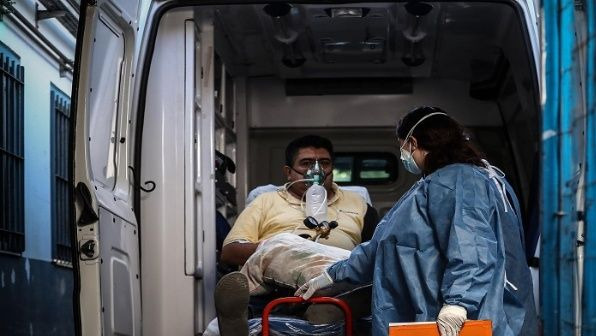 The new measures aim to avoid further strain on health facilities, where a high number of patients are currently being cared for. | Photo: EFE

Buenos Aires, May 3 (RHC)-- Argentina put into effect this Monday a new set of measures to curb the second wave of COVID-19 and avoid the collapse of its healthcare system, which were announced by President Alberto Fernandez last April 16.

The measures translate into the application of greater restrictions, especially in the Metropolitan Area of Buenos Aires (AMBA), the most affected by the contagions.  This region includes the Argentinean capital and the 40 municipalities surrounding it.

As explained by the head of state, a classification of four zones is established according to the epidemiological risk, the last of which is of "epidemiological and sanitary alarm."

In line with the will that health, people's lives and families' economy constitute priorities, it was decided to suspend in municipalities that are in phase 3 activities that until now were allowed with reduced capacity, such as attending cinemas, swimming pools in enclosed spaces and gyms.

It was also decreed the suspension of religious ceremonies, which until now were celebrated with the participation of up to ten people. Likewise, the presence of people in performing arts is reduced from 30 to ten people.

In addition, in the AMBA, the traffic ban continues between 20H00 and 06H00 local time, while businesses may open until 19H00 local time with open-air service only, since after that time they can perform home services.

In explaining these and other measures, President Fernandez specified that the epidemiological situation in this area of the country "is critical and we have other areas with high sanitary tension."