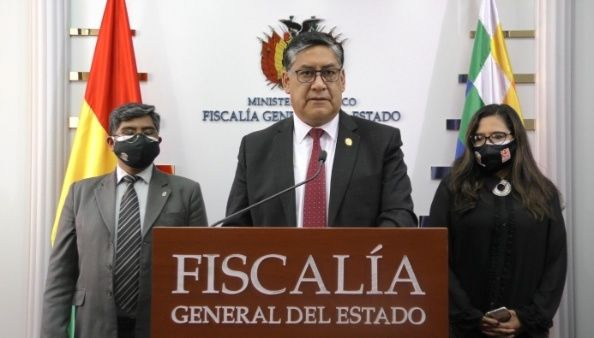 La Paz, May 28 (RHC)-- Bolivia's Attorney General, Juan Carlos Lanchipa, has announced that the extradition process of former de facto government minister Arturo Murillo has begun.  Murillo is currently detained in the United States on charges of money laundering, among other charges.

"The Departmental Prosecutor's Office of La Paz has initiated this extradition process against Mr. Arturo Murillo and the other people who are also involved," the high-ranking official stated at a press conference.

At the same time, the prosecutor Lanchipa pointed out: "we are also going to request, as we have mentioned, all actions for the recovery and repatriation of the assets that would have been the product of these illicit acts and that are abroad. Within this framework, the freezing of international bank accounts will also be requested".

Attorney General, Juan Lanchipa, announces the beginning of the extradition process of Arturo Murillo, who is being prosecuted in Bolivia, also for overpricing in the purchase of tear gas. He confirms the operation to the house of the former Minister of Government

Referring to the criminal process directed against Murillo in Bolivia, Lanchipa went on to detail that "this morning several raid operations have been deployed. The prosecutors are still making the corresponding evaluation of these three operations".

The U.S. Department of Justice informed this Tuesday from its website, through a press release, that under charges of money laundering and corruption, arrested in the state of Florida the former Minister of Government of Bolivia, Arturo Murillo, who served during the mandate of the former president of the coup, Jeanine Áñez.