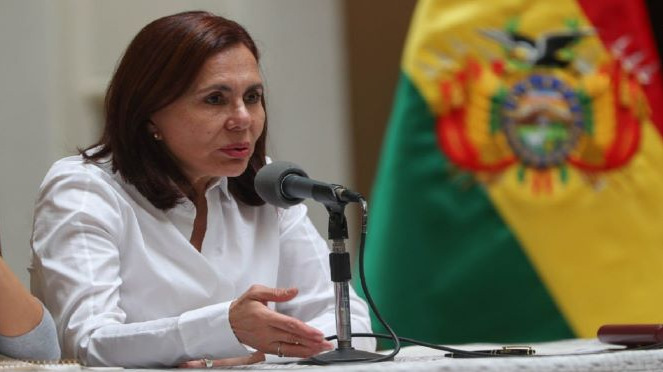 Karen Longaric will have to answer along with former Ministers of Defense, Fernando López, and of Government, Arturo Murillo for undue use of influence | Photo: @pagina_siete

La Paz, June 1 (RHC)-- The former foreign minister of the past de facto government of Bolivia, Karen Longaric, was summoned on Tuesday by the Attorney General's Office to give an informative statement, as a witness, as part of the investigation into the purchase of tear gas at an overpriced amount.

This crime is part of a case of undue use of influence that is under investigation and has as main defendants the former ministers of Defense Fernando López, and of Government Arturo Murillo, the latter detained in the United States, also on criminal charges.

According to local media, the summons indicates that the former Minister of Foreign Affairs, from the government of the former de facto president, Jeanine Añez, will have to go before the Specialized Anti-Corruption Prosecutor's Office.

The Minister of Justice and Institutional Transparency, Iván Lima, asked the Prosecutor's Office to take the declarations of former President Añez and members of her cabinet who signed decrees 4090, 4116 and 4168 that endorsed the acquisition of tear gas and non-lethal weapons for the Ministry of Defense through the Ministry of Government at an overprice of U$D $2,300,000.

The minister mentioned Longaric among several implicated parties and asked her to appear as a witness, instead of just expressing her opinion through social networks.  Likewise, the Minister of Government, Eduardo del Castillo, revealed this Monday that the money obtained at an overprice for the purchase of gases was invested in a project and a real estate company in Santa Cruz and Cochabamba.

"A great part of these resources coming from corruption have been invested in a construction here in the department of Santa Cruz, we are talking about the construction of the World Trade Center in Urubó.  We are also stating that a large part of the resources would be found in the real estate company El Dorado," he said in a press conference.

For his part, Longaric directly blamed Jeanine Añez for favoring Arturo Murillo and appointing his sister, Mercedes Murillo Prijic, as Bolivian consul in Miami, United States.  He also did not confirm if he is still in the country, although local media confirmed that he is in Chile.

"As Chancellor of the Republic, I receive suggestions and also instructions to occupy certain positions, particularly in the consular corps", said Longaric exonerating himself regarding the appointment.

"(...) The instruction came from there (...) obviously I spoke with the President and I spoke with Murillo himself telling them that this appointment was going to bring complications because it was not good for a brother of a Minister to go in the consular service or in the diplomatic service, but it was a very categorical instruction from the Presidency backing, obviously", he said.

The process against former ministers of the de facto Government (2019 - 2020) began last year from a complaint from a group of legislators of the Movement Towards Socialism (MAS).

Recently, two former officials of the Ministry of Defense were sent with preventive detention to the San Pedro prison for this case, as well as the investigation against an alleged partner of former minister Murillo was extended.