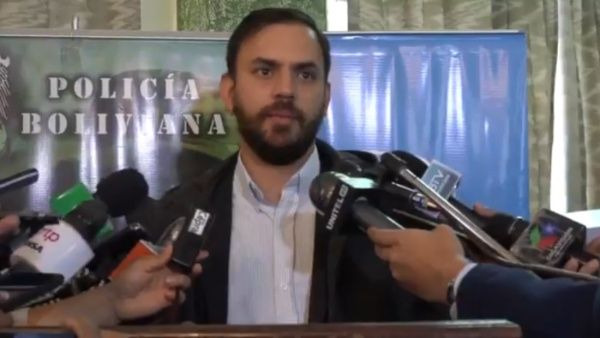 The Bolivian Minister of Government stressed that Lenín Moreno provided weapons of war to the de facto regime of Áñez. | Photo: Screenshot

La Paz, June 11 (RHC)-- The Government of Ecuador presided by Lenín Moreno supported the coup against the then president of Bolivia, Evo Morales, in November 2019, and loaned weapons to the de facto regime headed by Jeanine Áñez, a Bolivian official source denounced on Thursday.

The Bolivian Minister of Government, Eduardo del Castillo, told the press that Moreno, as president of Ecuador, provided war ammunition and "non-lethal" elements of repression such as tear gas, pellets and others, to the coup government of Áñez.

"We have seen that the Ecuadorian government loaned tear gas to the government of Mrs. Jeanine Áñez, however, we have unofficial information that it has also provided high caliber ammunition.  We are talking about munitions of war," assured the official.

He commented that the investigations will determine what were the purposes of these munitions of war during the de facto government, which ended after the arrival to power of the current Bolivian President Luis Arce, winner of the October 2020 elections.

"We understand that much of the tear gas was on loan.  We will see if Ecuador's legal regulations allowed Lenín Moreno to take out weapons of war to other countries," said Del Castillo.

This Thursday, the state-owned Bolivian Information Agency (ABI) disclosed an official document from Ecuador's Ministry of Government in which it is revealed that Moreno's administration lent Áñez 5,500 grenades and 2,949 projectiles in November 2019.

In the document, dated May 27, 2020, it can be read that the commander of the Police of Ecuador, Hernán Patricio Carrillo Rosero, requests his military attaché in Bolivia, José Luis Frías, to coordinate the return of the elements of repression that he provided to the de facto government of Bolivia in November 2019.