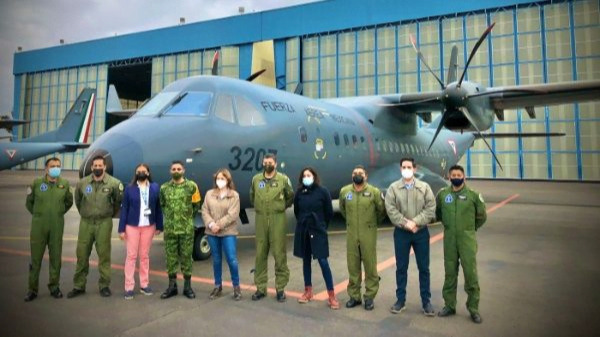 Martha Delgado, Undersecretary for Multilateral Affairs and Human Rights of the SRE, informed that she will personally deliver the vaccines to sister countries. | Photo: Twitter @marthadelgado

Mexico City, June 12 (RHC)-- Mexico will donate some 400,000 doses of COVID-19 vaccines to Bolivia, Paraguay and Belize.  The Mexican government announced that the deliveries will be made in the next few days.

According to official information, Belize will receive 100,000 doses of the drug, while Bolivia and Paraguay will get 150,000 each.   According to the statement, the decision was made by Mexican President Andrés Manuel López Obrador, and carried out by Foreign Minister Marcelo Ebrard, with the aim of "showing Mexico's solidarity and promoting access to vaccines in countries of the region."

"The vaccines to be delivered are the product of a collaboration agreement between the Governments of Mexico and Argentina, the Carlos Slim Foundation, AstraZeneca, the Argentinean laboratory mAbxience where the active substance is produced, and the Mexican Liomont plant, where the vaccine is packaged," reads the text.

Likewise, authorities pointed out that thanks to this cooperation, Mexico "will have access to 77,000,000 doses during the year 2021."  The head of the Ministry of Foreign Affairs (SRE), stated on his Twitter account that our country is carrying out this work in its capacity as president of the Community of Latin American and Caribbean States (CELAC).

Meanwhile, Martha Delgado, Undersecretary for Multilateral Affairs and Human Rights of the SRE, informed that she will personally deliver the vaccines to the sister countries.

"We are convinced that intra-regional solidarity must prevail in times of great crisis, so this morning we are shipping 400,000 doses in donation, at the rate of 100,000 doses to Belize, 150,000 to Bolivia and 150,000 to Paraguay, so that these Latin American countries can continue with their vaccination programs," said Delgado.

"After carrying out an exhaustive consultation with the countries in the region to identify their immediate needs, we hope to be able to prepare more shipments for other countries in the near future," said the undersecretary.