Clashes in France as protesters march over national COVID-19 passport 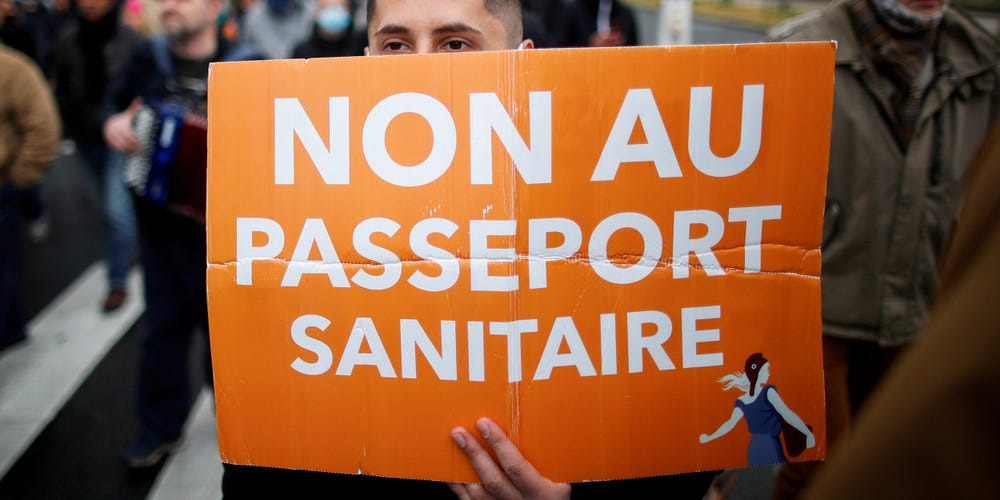 Paris, July 14 (RHC)-- Protests took place across France on Wednesday with heated clashes erupting with police in Paris.  A number of groups, including those associated with the Gilets Jaunes (Yellow Vest) movement, held demonstrations across the country on Tuesday following the government’s announcement of compulsory vaccinations for health workers and the introduction of a national COVID-19 passport.

In Paris, eyewitness footage captured people fleeing from tear gas as police were deployed in sizable numbers to break up the demonstrations.  Major city arteries could be seen blocked by protesters and police. In one instance, a canister of tear gas landed near a restaurant terrace, causing diners to scarper inside.

Smaller protests took place elsewhere in the city, with some groups convening at Place de Clichy. Demonstrators could be heard banging drums and chanting in footage shared on social media.

Demonstrations were also held in Corsica, where people gathered to denounce what they decried as an attack on individual freedoms, demanding the right to “own their choice” over COVID-19 vaccinations.

Meanwhile, online reports said that more than 1,000 people marched in the southern French city of Perpignan.

On Monday evening, President Emmanuel Macron announced that vaccines would become mandatory for healthcare workers in France beginning September 15rh.  Those who haven’t been fully vaccinated by this date face losing their jobs.

Macron also announced that the authorities would launch a health pass, proving that the holder has either tested negative, is fully vaccinated, or recently recovered from COVID-19.  The pass will go live in August and will be used to verify status on entry to bars, restaurants, cafes and shopping centers.

Wednesday’s protests occurred as the country celebrates Bastille Day, commemorating the storming of a medieval armory, fortress and political prison during the French Revolution.  Festivities and the usual parade have been overshadowed by the protests, as well as being dampened by poor weather.