Protesters rally in France and Germany against mandatory COVID rules 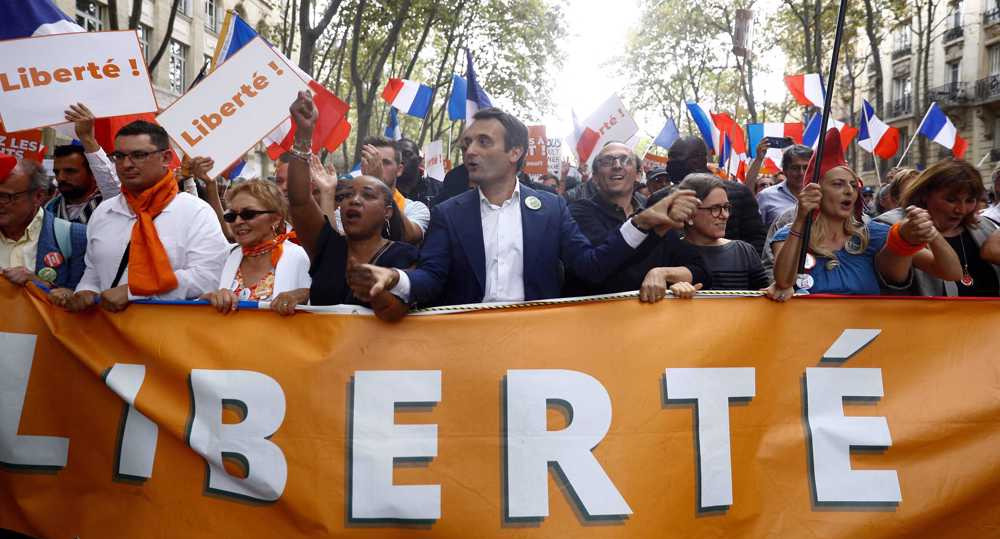 Leader of French rightwing party "Les Patriotes" (The Patriots), Florian Philippot (Center), attends a protest rally organized by his party against the compulsory COVID-19 vaccination for certain workers and the mandatory use of the health pass, near Ecole Militaire in Paris on August 28, 2021. (Photo by AFP)

Paris, August 30 (RHC)-- Protesters have taken to the streets in cities across France and in Berlin, Germany, to express their opposition to the government-imposed COVID-19 regulations.

The French Interior Ministry announced that approximately 158,580 protesters took part in the rallies for the 7th consecutive weekend in cities around France on Saturday.  Media reported that the number of protesters, who included members of the yellow vest movement, had dwindled from 175,500 protesters a week ago.

Sixteen people were arrested and three police officers were slightly injured in protests across the country.  Addressing protesters in Paris, Florian Philippot, leader of the far-right Les Patriotes (The Patriots) political party and likely presidential candidate in next year's election, criticized the government of Emmanuel Macron over mandatory COVID vaccinations and the extension of the controversial health pass system.

Placards held by protesters at nationwide rallies demanded freedom. One banner read, "Welcome to Controlistan."   "The vaccine isn't the solution," said retiree Helene Vierondeels, who attended the right-wing protest rally in Paris. "We should rather be stopping the closures of hospital beds and continuing the barrier measures."

"We aren't laboratory rats," said an 11-year-old boy who was marching with his father in Bordeaux.  "We live in a free country, there are no figures that justify mass vaccinations," his father said.

The French government claims, however, that most of the COVID-19 patients admitted to hospitals are unvaccinated.  It also insists that the health pass system is necessary to encourage vaccination and avoid a fourth national lockdown.

Meanwhile, the number of COVID patients hospitalized in intensive care units dropped on Saturday for the first time in nine days, dropping by 11 to 2,259.

The health pass system requires people who want to go to public places such as large shopping centers, restaurants and movie theaters, or ride on a long-distance train to submit their vaccination card or documents showing they have recently tested negative for the coronavirus.   Most of the population in France has received at least one dose of the COVID vaccine.

In Germany, thousands of protesters gathered in the capital city of Berlin to take part in a protest led by the right-wing Querdenker group against the German government's COVID restrictions, despite bans against several gatherings.

Thousands of standby riot police walked alongside protesters, most of whom were unmasked, as helicopters monitored the situation from the air.   "The police will enforce the assembly bans, be present accordingly and protect the government quarter in particular," said a police spokesperson before the rally.   About 50 people were detained, some for assaulting officers.