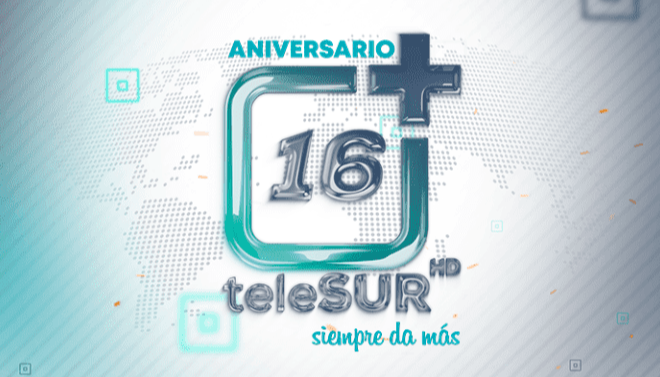 Caracas, July 24 (RHC)-- The media giant of the South -- teleSUR -- celebrates this Saturday 16 years informing and integrating not only the peoples of Latin America and the Caribbean, but around the world.

In a statement issued in Caracas, the Venezuelan capital, the management of teleSUR pointed out that the broadcaster has crossed regional borders, reaching more than 100 countries and  strengthening the bonds of brotherhood and solidarity.

The statement noted that the multi-national TV giant has consolidated its position as a transforming axis of communications, offering a critical view of current events through its correspondents, analysts and specialists, who contribute to the important mission of providing information to people around the world.

TeleSUR promotes regional integration and provides truthful information about international and regional events, becoming a major player in the news business, respected around the world.  The slogan: "Nuestro Norte es el Sur" -- our North / our guiding star / is the South -- refers to the focus of teleSUR broadcasts: the battle of the South 3rd World against the rich industrialized 1st World, North.

Today, on its 16th anniversary, Radio Havana Cuba congratulates the staff and management of our sister broadcaster teleSUR.