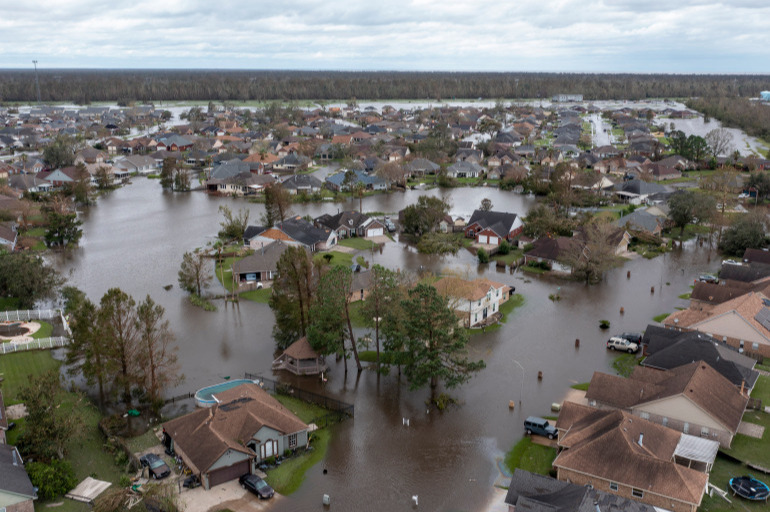 Flooded streets and homes in Louisiana after Hurricane Ida moved through the state in August [File: AP]

United Nations, September 16 (RHC)-- The pace of climate change has not been slowed by the global COVID-19 pandemic and the world remains behind in its battle to cut carbon emissions, according to the United Nations.

A report published on Thursday by a range of UN agencies and their scientific partners just weeks before the key COP26 climate summit, said climate change and its effects were accelerating.

The virus-related economic downturn caused only a temporary downturn in CO2 emissions last year and it was not enough to reverse the rising levels of greenhouse gases in the atmosphere, according to the United in Science 2021 Report, which presents the latest scientific data and findings related to climate change.

Reduction targets are not being met and there is a rising likelihood the world will miss its Paris Agreement target of reducing global warming to 1.5C (34.7F) above pre-industrial levels, the UN said.

“This is a critical year for climate action,” UN Secretary-General Antonio Guterres said in response to the report’s findings, adding that the results were an “alarming appraisal of just how far off course we are.”

“This year has seen fossil fuel emissions bounce back, greenhouse gas concentrations continuing to rise and severe human-enhanced weather events that have affected health, lives and livelihoods on every continent,” he said.

Concentrations in the atmosphere of the major greenhouse gases – CO2, methane and nitrous oxide – continued to increase in 2020 and the first half of 2021, the UN said.  COP-26, the UN Climate Change Conference, will be held in Glasgow from October 31st to November 12th.