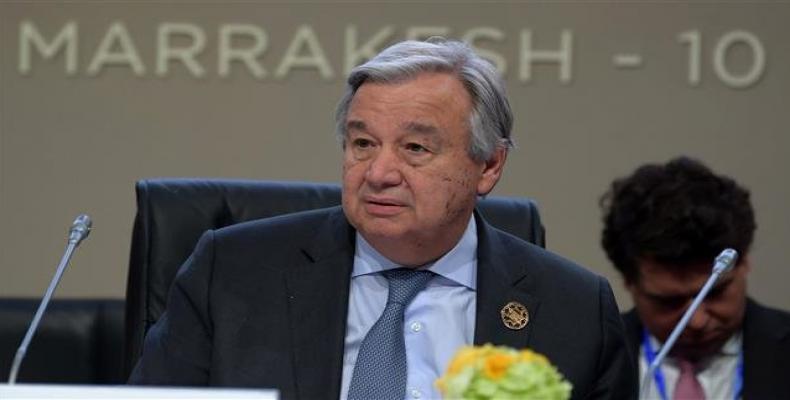 The fight against climate change is a "matter of life and death today," he told ministers and delegates at the 195-nation UN forum tasked with beating back the threat of global warming, barely 48 hours before the meet in the coal town of Katowice was set to adjourn.

The two-week talks are tasked with breathing life into the 2015 Paris Agreement, which vows to cap global warming at "well under" two degrees Celsius (3.6 degrees Fahrenheit) and funnel hundreds of billions of dollars to poor countries already feeling the sting of deadly storms, heatwaves and droughts made worse by climate change.

But efforts to elaborate a "rule book" for the Paris pact and to boost the carbon-cutting pledges of all nations have run aground, even as a barrage of scientific reports have warned that only immediate and radical measures can avert catastrophic climate impacts.

"The eyes of the world are upon us," said Guterres, who had not planned to return to the talks after addressing the opening plenary 10 days ago.  "To waste this opportunity would compromise our last best chance to stop runaway climate change," he said.  "It would not only be immoral, it would be suicidal."

A major report called for by the UN climate body concluded in October that Earth's rise in temperature must be capped even lower -- at 1.5C -- to avoid the danger of runaway warming.

But several countries at the talks, led by the United States and Saudi Arabia, have blocked efforts to endorse the report, which many developing countries see as essential.

"The IPCC report on 1.5C is the basis for all future action, on what we need to do," Vanuatu Foreign Minister Ralph Regenvanu told AFP.  Endorsing the report's findings at the conclusion of the UN forum "is a red line issue for us."