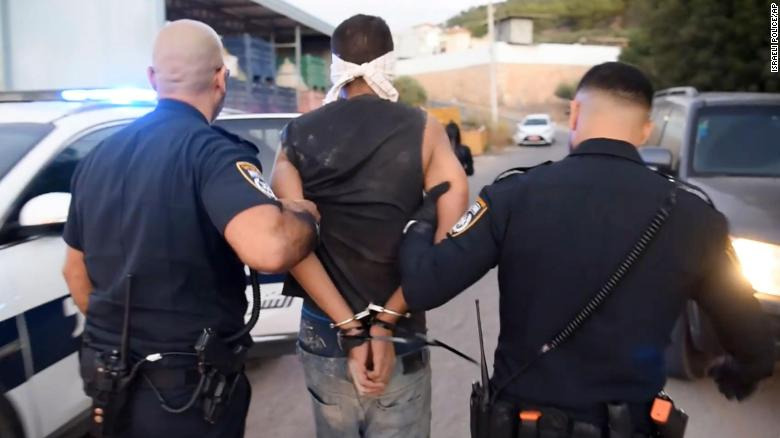 Israel says its forces have arrested the two remaining Palestinian prisoners, who escaped from a high-security jail nearly two weeks ago.

Tel Aviv, September 19 (RHC)-- Israel says its forces have arrested the two remaining Palestinian prisoners, who escaped from a high-security jail nearly two weeks ago.  The Israeli ministry of military affairs said early on Sunday that Iham Kamamji and Munadil Nafiyat, both members of the Islamic Jihad resistance movement, were apprehended in the occupied West Bank city of Jenin.

It said the two Palestinians “were caught alive”, surrendering without resistance after troops encircled the building where they were hiding.

Fouad Kamamji, Iham’s father, told the Associated Press that his son had called him when the Israeli troops surrounded the house and said he would surrender “in order not to endanger the house owners.”  Palestinian media outlets said there were exchanges of gunfire during the pre-dawn raid by Israeli special forces, but there were no reports of casualties.

Two other Palestinians, reportedly Jenin residents, were also arrested in the raid.

Kamamji, originally from Kafr Dan village which lies 8 kilometers (4.9 miles) northwest of Jenin, was arrested in 2006 and jailed for life over alleged murder of an Israeli settler.

Nafayat has not been charged with a crime other than being a member of the Islamic Jihad movement. He was being held under Israel’s practice of the so-called administrative detention, which allows the regime to imprison suspects without charge.

On September 11, Israeli media outlets reported that four of the escapees had been arrested in the northern part of the occupied territories.  Hamas has warned Israel of serious consequences amid reports that the regime has launched repressive measures against Palestinian prisoners in the wake of the recent escape.

The movement has said the Palestinian nation and resistance fighters will not remain silent in the face of ongoing violations, and that Israeli prison officials will pay a heavy price for their continued torture of Palestinian inmates.