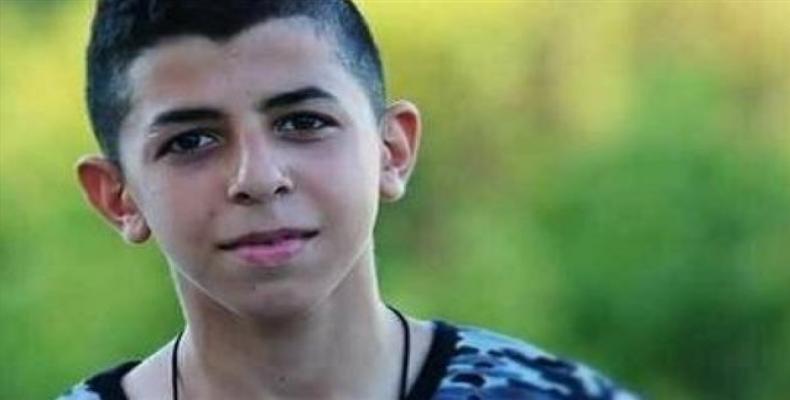 Tel Aviv, August 8 (RHC)-- An Israeli military court has handed down a jail term of 18 months to an Palestinian teenager as the number of Palestinian children being held in Tel Aviv regime’s prisons and detention facilities is soaring following U.S. President Donald Trump’s decision to recognize Jerusalem as Israel’s capital and relocate the U.S. embassy in Israel from Tel Aviv to the occupied city.

The court passed the sentence on Qassem Abu Bakr, who is a resident of the northern West Bank town of Ya'bad, and also ordered him to pay a fine of 5,000 Israeli shekels (US$ 1,357.50).  The jail terms comes as nearly 350 Palestinian minors are currently being held under conditions in Israeli prisons, which do not meet the minimum requirements laid down by international rights institutions.

According to the Palestinian Information Center, at least 8,000 Palestinian minors have been arrested and prosecuted in Israeli military courts since 2000.  Ahed Tamimi, a Palestinian teenager who endured an eight-month prison sentence for slapping Israeli security forces, was released from an Israeli prison 10 days ago.

It is estimated that between 500 and 700 Palestinian minors, some as young as 12 years old, are arrested and brought to trial in Israeli courts.  The most common charge is "stone-throwing."  More than 7,000 Palestinian prisoners are currently held in some 17 Israeli jails, dozens of whom are serving multiple life sentences.

Over 500 detainees are under the so-called administrative detention, which is a sort of imprisonment without trial or charge that allows Israel to incarcerate Palestinians for up to six months, extendable an infinite number of times.

Some prisoners have been held in administrative detention for up to 11 years without any charges brought against them.  Palestinian detainees have continuously resorted to open-ended hunger strikes in an attempt to express their outrage at the detentions.

On December 21st last year, the United Nations General Assembly overwhelmingly voted in favor of a resolution that calls on the US to withdraw its controversial recognition of Jerusalem as Israel's “capital.”

In an attempt to prevent the passing of the resolution, Trump threatened reprisals against countries that backed the measure, which had earlier faced a U.S. veto at the UN Security Council.  Israel, however, rejected the world body’s resolution while thanking Trump for his decision to move the U.S. embassy to Jerusalem al-Quds.

On January 18, the United States reneged on a pledge to contribute $45 million to the United Nations Relief and Works Agency for Palestine Refugees in the Near East (UNRWA), which supports more than five million registered Palestinian refugees and their descendants.

The announcement to cut aid to Palestinian refugees came after the U.S. president made a threat to cut off aid to the UN’s Palestinian refugee agency.  In a series of tweets earlier this year, Trump had said that the U.S. paid “the Palestinians hundreds of millions of dollars a year” and yet got “no appreciation or respect.”