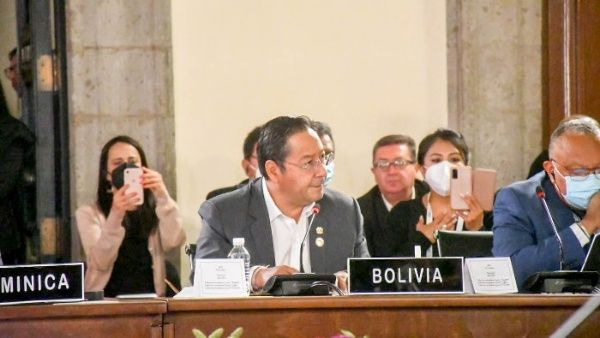 The president of Bolivia, Luis Arce, pointed out that the interference of the OAS in the coup d'état against Evo Morales is more than evident. | Photo: @LuchoXBolivia

Mexico City, September 19 (RHC)-- Bolivian President Luis Arce Catacora has affirmed that the Organization of American States (OAS) does not represent Latin America.  He made the comments during an interview he gave on his visit to Mexico to participate in the Sixth Summit of the Community of Latin American and Caribbean States (CELAC).

"CELAC was created precisely because it was a body that represents us.  The OAS no longer represents us.  There are other interests and others who determine what happens in the OAS," said the president in a special interview for teleSUR following the CELAC Summit.

"In CELEC we feel represented," Arce affirmed, even in spite of the political and ideological differences that exist within the regional mechanism.

In this sense, he said, that there is a need for an international organization that watches over democracy, that does not interfere.  "In our case we have seen it firsthand.  There was a marked interference by the OAS in the November 2019 elections in Bolivia," he emphasized.

Arce reiterated that the OAS interfered in the process by taking out reports that were not part of the agreement signed between the organization and the Government.  "The interference and participation of the OAS in the coup d'état is very evident," he pointed out.

"There is a Latin Americanist sentiment.  There is a feeling that we must integrate," Luis Arce said about the awareness of the region of working together in CELAC.  "On the issue of the pandemic, if we had acted jointly, for example, by reopening CELAC, perhaps we would not have had the results we have had as a region in the fight against COVID-19."

The Bolivian president referred to other issues, such as vaccination process in his country, which is universal and free, to issues related to the 2019 coup d'état against former President Evo Morales and the intervention of the OAS in that process.

"We were the ones who recovered democracy from the hands of a de facto government, from a dictatorship in its fullness," he added.   On this issue, he said that 38 deaths weigh on the former de facto president, Jeanine Áñez.

And the Bolivian president noted that Añez has been proposed to receive a human rights award by the European Union.