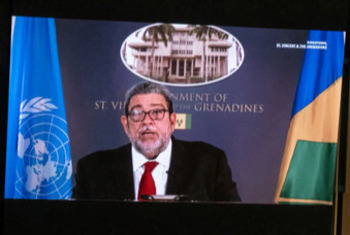 In his speech, Gonsalves warned of the urgent need for an appropriate multilateral initiative to help Haiti. | Photo: UN News​

United Nations, September 27 (RHC)-- The Prime Minister of St. Vincent and the Grenadines, Ralph Gonsalves, called at the United Nations to lift the blockade imposed by the United States on Cuba in the 1960s and to withdraw unilateral coercive measures against Venezuela.

Participating in the 76th General Assembly of the United Nations, Gonsalves indicated that many old and long-standing political disputes should come to an end in these new and dangerous times facing humanity.

In his address, the prime minister stressed that of these differences, Washington should dismantle the internationally illegal and crippling economic blockade against Cuba.  He also called for putting an end to the unjust, harsh and unilateral economic and financial sanctions against Venezuela and Nicaragua.

In his intervention at the discussion session, he said: "We are at an historic crossroads of a special kind.  We must rise up, collectively, to sensibly address the new imperatives needed in these most challenging of times."  He emphasized that the coronavirus pandemic has taken the world into "a real tailspin," and urged the international community to put aside their differences and work in solidarity.

On the fifth day of sessions, the Caribbean leader said: "Globally, we have witnessed unacceptable vaccine nationalism; the politicization of vaccine deployment; and the deployment of vaccines to the rich first and then to the poor."  Gonsalves warned that the pervasive inequalities that defined the pre-Covid-19 political and socioeconomic order "must not become the nightmare of tomorrow."

Ralph Gonsalves also acknowledged "the remarkable and noble work of some global institutions, such as the World Health Organization ( WHO ), the World Bank and the COVAX Center, to make vaccines more accessible to poor or marginalized countries."

Unless the world changes course, the prime minister warned that "an imminent ecological disaster awaits humanity."   "Climate change is an existential threat to humanity," and especially to small island developing states, he stressed, pleading for major global greenhouse gas emitters to find "the political will and resources" to address this "grave challenge."

While "hoping for the best" at the upcoming United Nations Climate Conference ( COP26 ) in Glasgow, Scotland, Gonsalves admitted that "we fear the worst," namely "more procrastination and shirking of responsibility by major emitters."

"Humanity is at midnight - can we meet the challenge? We may not live to find the answer if business as usual continues," he said, and called on world leaders to renew their efforts to protect "their planet that we all call home."