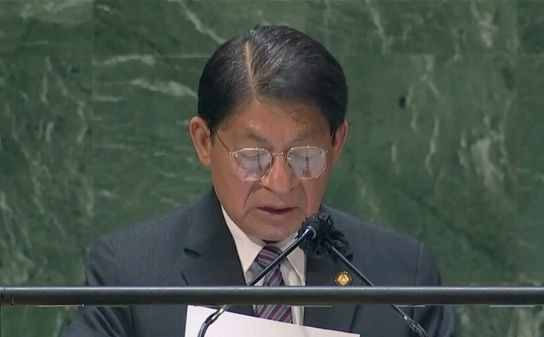 The Nicaraguan foreign minister condemned interventionist processes such as those suffered by the people of Palestine and Syria. | Photo: @lavozsandinista

United Nations, September 28 (RHC)-- Nicaraguan Foreign Minister Denis Moncada condemned and demanded this Monday during the 76th Session of the United Nations General Assembly the immediate cessation of all illegal unilateral coercive measures that imperialist powers impose on people of the world.

"These aggressive policies of the empire constitute a savage obstacle to the eradication of poverty and progress towards sustainable development, and constitute a brake on the guarantee of stability, peace and development of families, peoples and nations," remarked the top diplomatfrom Nicaragua in his speech.

Denis Moncada added that in times of the COVID-19 pandemic, these measures become a crime against humanity for those who impose them.  "They are unacceptable.  We reject them and reiterate our solidarity with the millions of people who suffer under these sanctions," he said.

The Nicaraguan foreign minister also condemned the blockade imposed by the United States on the brotherly people of Cuba for more than 60 years.  At the same time, he expressed his solidarity with Venezuela and its government presided by Nicolás Maduro, who has suffered numeroous destabilization attempts.

"U.S. hegemonic political aggressions that constitute threats to Russia, China and the Democratic People's Republic of Korea.  We must defend the principle of dialogue and negotiation and the non-use of force and threats as a basic principle of the UN Charter," said Moncada.

He also remarked that Nicaragua is a free, independent and sovereign state, but there are still "imperial forces that threaten our development project and undermine our efforts to comply with the 2030 agenda, and the implementation of sustainable development goals such as poverty eradication, which is a fundamental issue.  Next November, it will be the Nicaraguan people who will elect their highest representatives," he said.

For this reason, Moncada called on the multilateral organization to ensure peace, justice, security and comprehensive responses for the benefit of humanity, and governed by respect for international law, to counteract the impact of pandemics imposed by some powers to the detriment of the sovereignty and self-determination of peoples.

In his speech, Moncada referred to new challenges that the world will have to face under the canons of solidarity, equality and multilateralism, such as the challenges imposed by climate change and the commitment to general and complete nuclear disarmament for the benefit of humanity.

He also condemned any kind of use of force and advocated for an equitable distribution of vaccines to overcome the global health crisis caused by the coronavirus, at the same time that he described as unacceptable the hoarding of drugs by developed countries.  "It is necessary and fair to guarantee the transfer of technology and financial resources, and to declare vaccines a good of humanity," he said.

The Nicaraguan foreig minister also alluded to the urgency of creating a new international economic model on an inclusive basis, and access to universal rights for all, such as food, health and education.

He also called for reflection and a solution to the global refugee crisis, as well as the establishment of joint mechanisms among nations to promote orderly, safe and regular migration, capable of protecting millions of children, women and vulnerable groups, "who suffer the consequences of the greed of the most powerful and are victims of discriminatory policies that violate human rights."