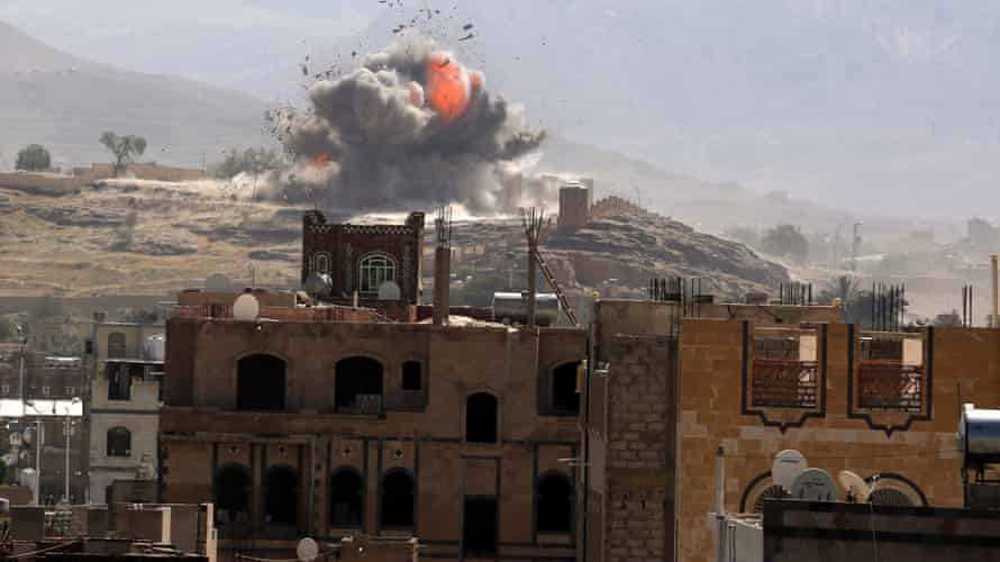 Dust rising from the site of a Saudi airstrike in Sana’a, Yemen. (File Photo by Reuters)

Sanaa, November 27 (RHC)-- Saudi warplanes have launched fresh airstrikes on the Yemeni capital Sana’a, leaving several casualties along with material damage.  They bombed the town of Dhahaban, which lies on the outskirts of the capital Sana’a, early Saturday, Yemen's al-Masirah television network said.

Earlier, Saudi warplanes conducted two airstrikes against an area in the Harf Sufyan district of Yemen’s northwestern province of ‘Amran.   Saudi aircraft also launched a dozen air raids against the al-Jubah and Sirwah districts in the central Yemeni province of Ma’rib.

Yemen’s official Saba news agency reported on Friday that Saudi-backed militants had violated 128 times during the past 24 hours a ceasefire agreement on the western coastal province of Hudaydah.  The report, citing an unnamed source in Yemen’s Liaison and Coordination Officers Operations Room, said the violations included 21 reconnaissance flights over various regions in addition to 35 counts of artillery shelling and 51 shooting incidents.

Saudi Arabia, backed by the U.S. and other key Western powers, launched the war on Yemen in March 2015, with the goal of bringing fugitive former president Abd Rabbuh Mansour Hadi’s government back to power and crushing the popular Ansarullah resistance movement.

Yemen’s Foreign Ministry condemns the US hypocrisy over the Saudi-led military aggression.
Having failed to reach its professed goals, the war has left hundreds of thousands of Yemenis dead and displaced millions more.  It has also destroyed Yemen’s infrastructure and spread famine and infectious diseases there.

Despite heavily-armed Saudi Arabia’s continuous bombardment of the impoverished country, Yemeni armed forces and the Popular Committees have grown steadily in strength against the Saudi invaders and left Riyadh and its allies bogged down in the country.

International weekly magazine The Economist wrote in its new edition that Saudi Arabia is growing desperate to end its disastrous war on its southern neighbor.  The report said while the Yemen conflict has become a "quagmire" for the Riyadh regime, and cost the kingdom untold billions and damaged its relations with key partners, the Yemeni forces think they are winning the conflict.

“The Saudis, by contrast, are growing desperate to end the war, if only for self-interested reasons.  A conflict sold to the public in 2015 as a quick romp has instead become a quagmire, one that has cost the kingdom untold billions and damaged relations with key partners, particularly America.  It has also invited frequent drone and missile attacks by the Houthis. The coalition says it intercepts 90% of attacks (a figure that is hard to verify). Still, a few have hit airports and other vital infrastructure,” the publication said.   “The Saudis are eager to cut their losses, but they cannot find a way to do so,” it added.