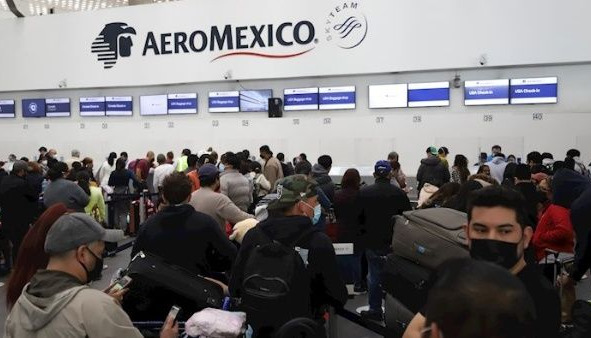 The cancellation of flights as a result of the number of contagions among pilots and crew has affected commercial flights from abroad and within Mexico. | Photo: EFE

Mexico City, January 9 (RHC)-- Mexico's Airline Pilots Union Association (ASPA) reported this Saturday that about 67 pilots from various airlines operating in the national territory have tested positive for COVID-19 and, as a result, about 55 flights have been canceled, causing service disruptions.

According to the statement published by ASPA, the distribution of infections by airline is 69 for Aeroméxico and 14 for Aeroméxico Connect, but they warn that the number may be higher due to the incidence of the Omicron variant.

"ASPA de México, together with Aeromar and Aeroméxico developed a protocol to take care of the health of our pilots and offer safety to our passengers," the statement said.

In Mexico, if a pilot tests positive for the disease, he or she should be isolated, but so should the rest of the crew until the disease is ruled out or confirmed, the document adds.  Likewise, ASPA specifies that although this measure reduces the number of pilots, it is a rule that allows operations with coronavirus-free crews.  "The pilots of ASPA and Mexico are and will be working normally, fully complying with the labor agreements we have with the airlines," the text says.   In addition, they emphasized that they will continue to monitor the crews and inform them in a timely manner.

With this decision some 22 flights were canceled on Thursday and 43 this Friday belonging to the companies Aeromexico and Connect, according to different local media detailed.  Destinations such as Guadalajara (west), Cancun (east) and Monterrey (north), are the ones that mainly suffer these cancellations.  A flight that was to depart from Seoul was suspended due to two cases of COVID-19 among the crew.

Mexico has confirmed 4,083,118 total cases and 300,101 deaths from COVID-19 as of this January 7, according to the Ministry of Health in its daily report. Mexico City, Mexico State and Nuevo Leon are the regions with the highest number of cases reported daily.