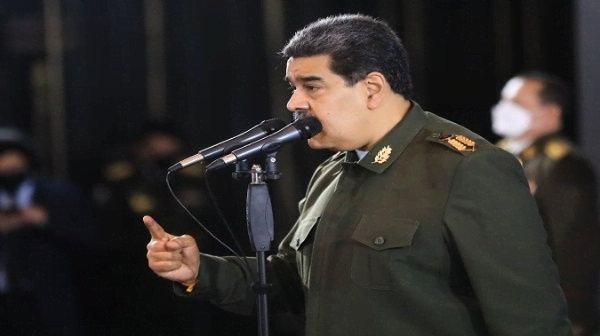 The President Nicolás Maduro during the promotion of the professional military personnel of the Presidential Honor Guard and the General Directorate of Military Counterintelligence (DGCIM) held in Caracas. Jul. 03, 2022. | Photo: Twitter: @NicolasMaduro

Caracas, July 3 (RHC)-- Venezuelan President Nicolás Maduro has denounced the planning from Colombia to perpetrate attacks against the national electric system and members of his government, and urged the Armed Forces to be alert.

"Let's defeat the threats that the outgoing government of Colombia intends to make against our homeland," said Nicolas Maduro.   The president's denunciation was made during the promotion of the professional military personnel of the Presidential Honor Guard and the General Directorate of Military Counterintelligence (DGCIM) held in Caracas, where he also highlighted the commitment of the agents to Venezuelan constitutionality.

For his part, the sectorial Vice-President of Public Works and Services and Minister of Electric Energy, Néstor Reverol, stated that there was a failure in the Pan-American Substation due to the explosion of a power transformer, affecting several areas of Caracas.

He added that the explosion was caused by the impact of a bullet, "which proves the sabotage and the continuity of the electric war.  We will provide more details in the next few hours," he said.

The affected areas of the Libertador municipality were Nueva Granada, San Pedro, Santa Mónica, Los Chaguaramos and part of Fuerte Tiuna, "the failure was caused by the explosion of a power transformer affected by a bullet impact, which is evidence of sabotage", Reverol pointed out.