Prime Minister of St. Vincent and the Grenadines proposes to disassociate from British Queen 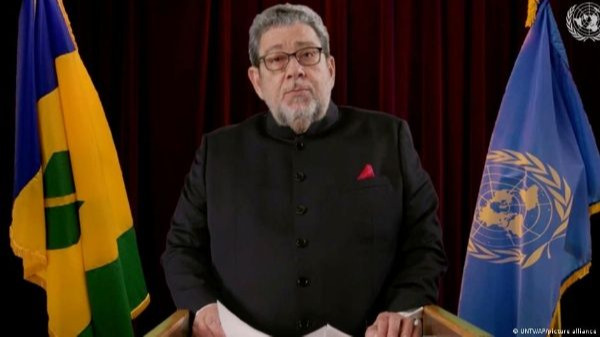 A similar referendum was held in the nation in 2009, but met with 55% disapproval among voters. | Photo: DW

Kingston, July 27 (RHC)-- St. Vincent and the Grenadines Prime Minister Ralph Gonsalves has proposed a single-point referendum to Parliament, which calls for replacing Queen Elizabeth II as head of state with a non-executive, Indigenous president.

Gonsalves detailed before the House that such a move will only take place if there is bipartisan support, and will be put to a popular vote of St. Vincentians.

"I am willing, if the opposition agrees, to put before the end of the year or early next year a question in a referendum: to have a president of the country," the premier expressed.

Gonsalves also said that if there is bipartisan support for the referendum, a committee will also be created "to carry out a decolonization process on the names" of places in the Caribbean nation.  "We'd rename Victoria Park.  We'd changed the name of Higginson Street and other places."

In this regard, Gonsalves expressed last November his hope that the independent countries of the Caribbean Community (CARICOM) would experience "the transition from a monarchical to a republican system"; an issue enacted in November 2021 by Barbados.

Already last April, St. Vincentans protested demanding reparations for slavery during a visit to that Caribbean nation by the Earls of Wessex, Edward and Sophia.  The Prime Minister of Antigua and Barbuda, Gaston Browne, also expressed last April the desire of this Caribbean nation to become a republic and thus detach itself from the British Crown.

St. Vincent and the Grenadines is an island country that gained independence from the United Kingdom in 1979, but remains linked to the British Crown, with Queen Elizabeth II as head of state.

Previously, in 2009 they held a similar referendum to propose the replacement of the queen as head of state, which was rejected by 55 percent of voters.