Government of Panama closes first phase of the dialogue table 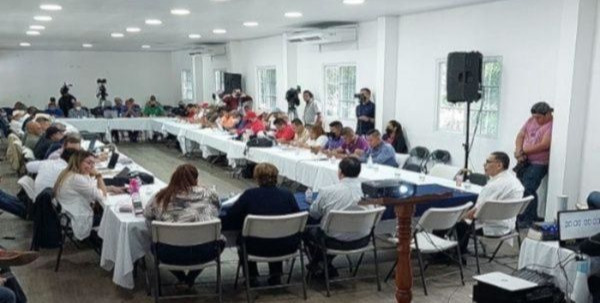 Union leader Saúl Méndez said: "We must be alert and prepare for new days of struggle in the streets and reconquer the rights that have been taken away." | Photo: Radio Trinidad

Panama City, August 15 (RHC)-- The Government of Panama unilaterally closed what it considered to be the first phase of the Single Table of Dialogue to give way to another stage, amid accusations from social, political and union organizations about the stagnation of the same.

The official announcement comes at a time when the dialogue did not advance in the discussions on the Social Security Fund (CSS), as well as with the proposal for the reduction of the electricity tariff.

Edwin Salamín, secretary general of the CSS, said that there was no agreement on the issue because the groups were requesting that the Catholic Church convene the dialogue for the CSS, but this is a State issue that is the responsibility of the National Government.

Salamin indicated that, following the methodology of the single dialogue table, the point related to the recomposition of the dialogue for the SSC is considered in disagreement.

During the talks over the weekend, the Catholic Church announced that the first phase of the dialogue would end today, and thus the second phase would begin.   Francisco Blanco, rector of the Santa María La Antigua University (Usma) and part of the dialogue facilitating team, said that the other issues will have to be addressed in a broad context with the participation of other sectors.

Blanco indicated that this first stage should be closed and move on to a second stage where all the issues will be discussed. He clarified that the round table has not ended and that the topics on the agenda are still in force.

The groups qualified the announcement as unacceptable, indicating that the eight points of the agenda have not been exhausted. They requested that the decision be reconsidered in order to continue the debate on the issue of corruption.

Representatives of the Alianza Pueblo Unido por la Vida, the Alianza Nacional por los Derechos del Pueblo Organizado (Anadepo), as well as leaders of the Ngäbe Buglé region and peasant communities, said they were surprised by the announcement of the closing of the first phase.

Blanco stated that the debate on corruption lacks important actors and pointed out that the second phase is now underway. The church will now be a companion and observer'. Now it is up to the Executive to make the call for the second phase, he said.

Saúl Méndez, leader of the powerful construction industry union and representative of the Alianza Pueblo Unido por la Vida, one of the three organizations negotiating with the government, said that it is unacceptable to close the dialogue without consulting those of us who are here (in the dialogue).

Previously, Méndez, general secretary of the Sindicato Único de Trabajadores de la Construcción (Suntracs), described the Government as disloyal and added that they do not comply with the agreements reached at the single dialogue table.

According to Méndez, one thing is written in the minutes and another in the decrees.  "They leave in the environment mistrust of what is being discussed and done. The demand is the same of the people and it is that the agreements be complied with", said Méndez, after Friday's meeting.