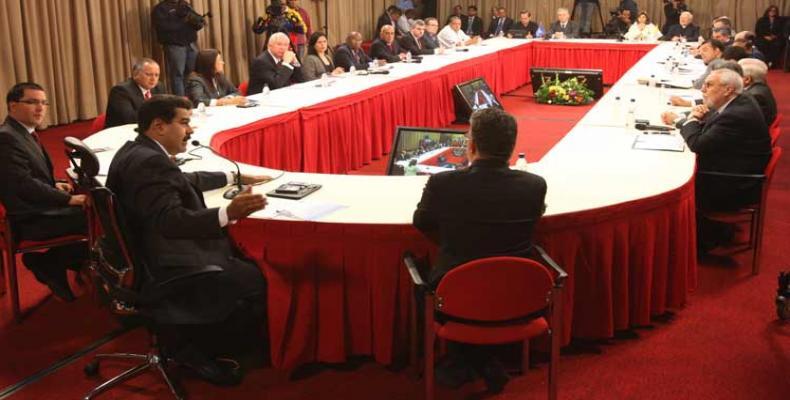 Santo Domingo, December 15 (RHC-teleSUR)-- Representatives of the Venezuelan government are meeting with leaders of the country's opposition in the Dominican Republic to continue dialogue aimed at promoting peace and unity.

Delegates from both sides are resuming talks after a two-week break. Members of the Democratic Unity Roundtable coalition are representing the opposition.

"The Venezuelan government is absolutely willing to dialogue," Venezuelan Foreign Minister Jorge Arreaza said.  "We are committed... this is an obligation and hopefully the opposition will continue to take part in the talks."

After previous two-day discussions ended on December 2nd, Dominican President Danilo Medina, a lead broker in the negotiations, said "the government and the opposition declare that there has been significant progress in the search for an agreement that peacefully resolves the situation in Venezuela.”

Representatives from Bolivia, Chile, Mexico, Nicaragua and St. Vincent and the Grenadines, as well as former Spanish Prime Minister Jose Luis Zapatero, will continue to observe the talks.

Negotiations will focus on six pending agenda points that include, on the part of the government, that the opposition recognize the legitimacy of the freely-elected National Constituent Assembly, ANC, in place since August.  They also want the opposition to stop working with the U.S. government to enact strict economic and political sanctions against the Venezuelan government.

Arreaza told EFE in Santo Domingo that the government hopes to "guarantee a peaceful coexistence where the law is respected and where violence is left out of any political game,” referring to opposition-incited riots last April that left over 100 dead and caused millions of dollars of damages to public and private properties.