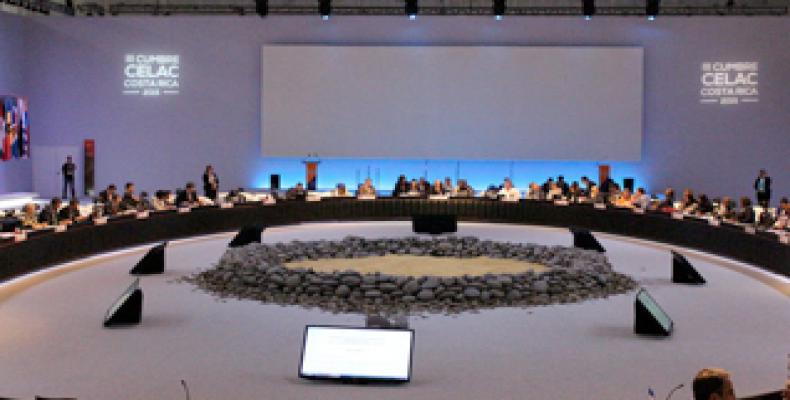 San José, January 30 (RHC-Xinhua) -- Latin American leaders Thursday called for an end to the U.S. trade blockade against Cuba and adopted a Plan of Action for 2015 in a regional summit held in Costa Rica.

The 3rd Summit of the Community of Latin American and Caribbean States (CELAC) concluded with the approval of the bloc's Plan of Action for the year, as well as "27 special declarations."

In addition to requesting Washington to "lift the blockade against Cuba," CELAC members declared their "support of Venezuela (in view of) the rightwing's destabilization plans, backing of Argentina in its debt restructuring and claim to the Malvinas Islands (known to the British as The Falklands), (and) backing of the peace talks between the Colombian government and the Revolutionary Armed Forces of Colombia (FARC)," according to the declarations.

CELAC's Plan of Action focuses on "eradicating hunger and poverty on the continent to improve the lives of the 33 countries that comprise the bloc."

On the final day of the two-day summit, Costa Rica's President Luis Guillermo Solis handed over the rotating presidency of the bloc to his Ecuadoran counterpart Rafael Correa, who will head the group over the next 12 months.

Correa also expressed his support for a proposal by Nicaragua and Venezuela to include Puerto Rico, a colony of the United States, in CELAC, as a way to declare Latin America a "region free of colonialism."

The summit gathered 21 heads of state and delegates from 33 Latin countries throughout the Americas.