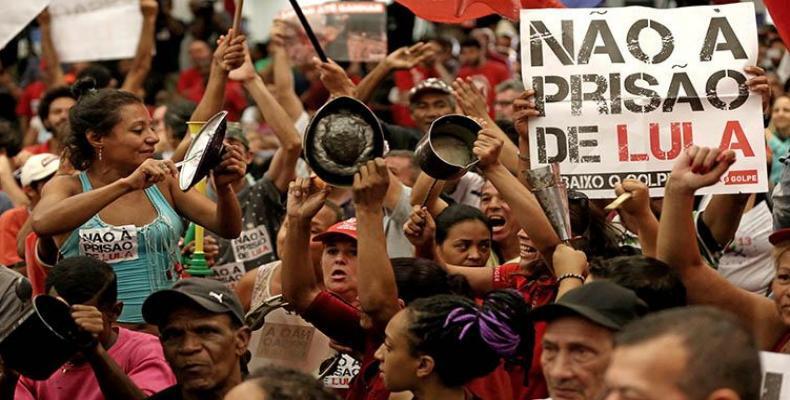 Havana, April 6 (RHC)-- Besides ample support from his own people, Latin America's leaders are also expressing their solidarity and condemning Brazil's decision to deny Lula's habeas corpus petition as a blow to democracy.

Bolivian President Evo Morales wrote on tweeter: “Stay strong, brother Lula. Your struggle and the struggle of the poor, workers, intellectuals and professionals committed to the dignity and sovereignty of our people is also our struggle.”

Venezuelan President Nicolas Maduro also expressed support for Lula. He wrote: “This injustice hurts the soul. Not only Brazil but the whole world hugs you (Lula).”

Uruguayan Senator and former President Jose Mujica said he is "with Lula with all his human solidarity: always, when it rains, it stops."

Former Chilean President Ricardo Lagos said the court's decision was "bad news for democracy in Brazil and Latin America… Lula is the leader with the most popular support and I hope and trust that democratic institutions in that great nation correct these serious decisions."

A group of Argentine senators of the Front for Victory released a statement in solidarity with Lula, saying that "the plan of the right-wing is to ensure that there are no more popular leaders that govern for the people.

Social leaders and politicians across the world are also voicing their discontent with the Supreme Court of Brazil's decision to deny former President Luiz Inacio 'Lula' da Silva's habeas corpus petition, in effect paving the way for his detention on corruption charges.

Lula's two terms in office were marked by a slew of social programs, lifting millions of Brazilians out of poverty and removing the country from the United Nations World Hunger Map. One of his most ambitious and successful plans is Family Allowance (Bolsa Familia). Launched in 2003, it provided stipends to families living below the poverty line. In turn, those families must prove that their children are attending school and have been vaccinated.

Having left office with a record approval rating of 83 percent, according to Datafolha, Lula currently tops this year's electoral polls. conducted by Vox Populi, Datafolha, Data Poder 360, Instituto Parana, the National Confederation of Transportation/MDA and Ipsos.

He has told his judicial and media critics that “If they don't want me to be a (presidential) candidate (this year), go to the polls and vote against me. Don't create artifices and tricks to prevent my candidacy.”