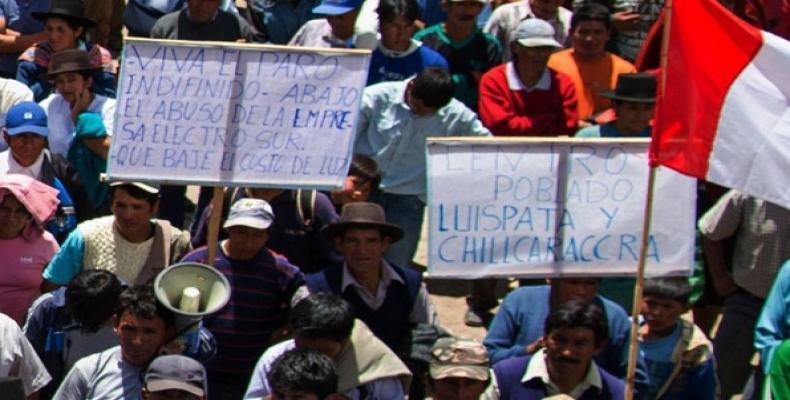 Lima, March 17 (teleSUR-RHC) Confrontations in the Peruvian region of Apurimac reached a new high on Monday, with demonstrators injured at the hands of police officers.

Four provinces in the region continue to stage demonstrations, which local media say is blocking traffic.

Residents are protesting against the increase in electricity charges and the low-quality service in rural towns provided by private company Electro Sur Este. Apurimac is located in the poverty stricken south of the Peruvian Andes.

Starting last Thursday, thousands of demonstrators blocked the main arteries into Andahuaylas, the largest city in the region. Normal trade came to a standstill and people stormed the company’s offices. Those who entered the premises took furniture, computers, and paperwork and burned them out in the street.

Reportedly, one of the shooting victims is 32-year-old Nestor Suca Cardenas. His condition has been described as critical after a perforation through the left side of his chest. A picture of Suca being taken away by an ambulance is circulating on social media. The governor of Apurimac, Wilbert Venegas, confirmed the shootings and said they took place in the province of Chincheros.

The protests were organized by the Committee to Fight for the Interests of the Province of Andahuaylas. Electricity bills there have at least doubled in urban areas and tripled in some rural areas. The body in charge of service claims, Osinergim, has admitted that there are problems.

As well as the lowering of the electricity bills and the improvement of quality of services in rural areas, the protesters are demanding reimbursement for unfair charges, reparations for damages caused by blackouts, and the cancellation of the contract of Electro Sur Este.