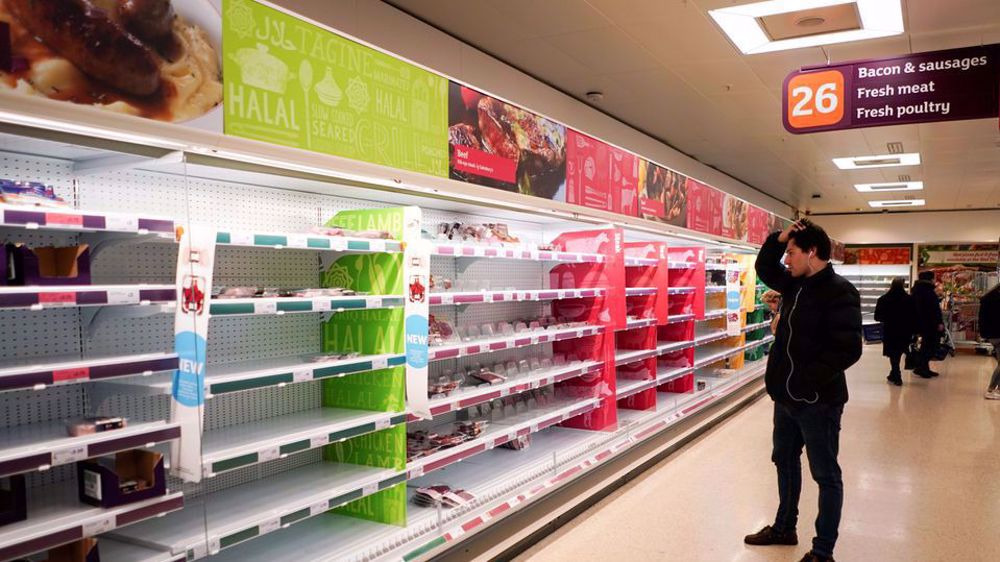 A man stands next to shelves empty of fresh meat in a supermarket, as the number of worldwide coronavirus cases continues to grow, in London, Britain, March 15, 2020. (Reuters photo)

London, August 30 (RHC)-- Stock shortages have impacted over a quarter of food and hospitality businesses in the United Kingdom in recent weeks and shoppers were told to expect higher prices as the country’s supply chain crisis gets worse.

Twenty-seven percent of food services and accommodation companies have experienced low stock levels and other sectors are also beginning to experience the same problems, according to a survey by the Office for National Statistics (ONS).

While a quarter of retail and wholesalers reported problems, 23 percent of manufacturers cited similar issues, the survey shows.  The mounting disruption to supply chains have resulted in empty shelves in supermarkets and forced some restaurant chains to close.

A severe shortage of lorry drivers, which has been deepened by both the pandemic and Brexit, has affected several businesses, including meat processors and fruit farms and McDonald’s that ran out of milkshakes this week.

“This, in turn, is a cost that will need to be passed on, and given the tight profit margins of most haulage operators, that means their rates to customers will have to go up.   “In turn, this may mean more of us paying higher prices for goods, services and shopping – including food prices – going forward.”

The RHA also said the situation is “not getting better,” warning it would take a long time to train new drivers and that means Government action is needed.

The United Kingdom’s manufacturing of goods from cars to fridges is getting hit by Brexit red tape which holds up supply chains, according to The Independent.