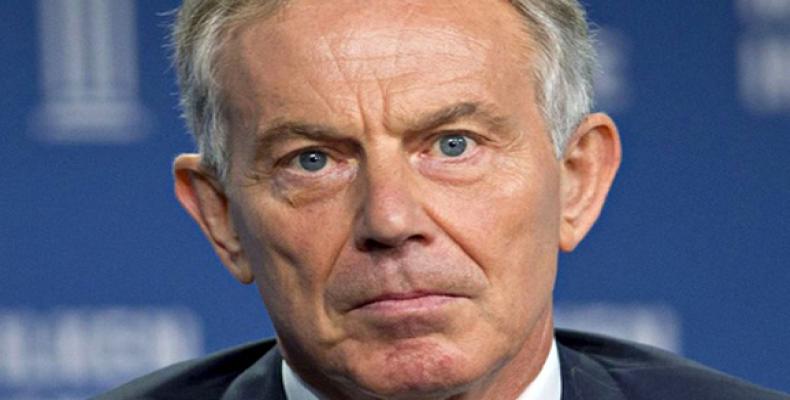 London, May 28 (RHC)-- Former British Prime Minister Tony Blair has reportedly stepped down from his post as an envoy for the Quartet group of Middle East mediators. Unnamed officials said on Wednesday that Blair had written to United Nations Secretary General Ban Ki-moon "to formally confirm that he will relinquish his role when he has fulfilled his outstanding commitments as quartet representative next month."

The former UK premier plans to remain "active on the issues" concerning the Middle East, British daily The Telegraph quoted an unidentified source as saying. Blair took the position in the Quartet of Middle East negotiators, made up of the UN, U.S., EU and Russia, after leaving 10 Downing Street in 2007.

According to a report released by Blair's office within the Quartet earlier this month, a bleak future was expected for talks aimed at resolving the conflict between Palestinians and Israelis, British daily The Independent reported recently. "Over a year on from the breakdown in talks between Israel and the Palestinians, there is still no tangible political horizon in sight," the office said in its report.

The last round of talks between Palestinians and Israelis collapsed in April 2014, a few months before the Tel Aviv regime launched its war on the besieged Gaza Strip.

The 50-day war on Gaza last summer that ended in August 2014 with an Egyptian-brokered truce. The aggression left about 2,200 Palestinians, including 577 children, dead and over 11,100 others wounded.

The Israeli-Palestinian talks have been hampered by Tel Aviv's expansion of illegal settler units on Palestinian lands.