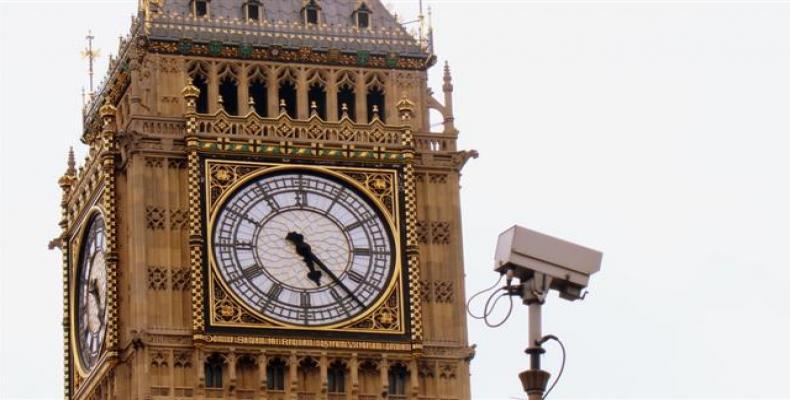 London, August 26 (RHC)-- The United Nations special rapporteur on privacy has slammed Britain’s surveillance situation, saying it is even worse than what author George Orwell imagined in his novel 1984.

“It’s worse... Because if you look at CCTV alone, at least Winston [Winston Smith in Orwell’s novel 1984] was able to go out in the countryside and go under a tree and expect there wouldn’t be any screen, as it was called. Whereas today there are many parts of the English countryside where there are more cameras than George Orwell could ever have imagined. So the situation in some cases is far worse already," Joseph Cannataci told the Guardian.

According to the British Security Industry Association, there are up to 6 million CCTV cameras across the UK. BSIA estimates that every Briton, on average, is being recorded by about 70 cameras each day.

The newly-appointed UN special rapporteur on privacy also described the UK’s oversight of surveillance as “a bad joke.” The United Kingdom has one of the highest totals of CCTV cameras in the world. There is a CCTV camera for every 11 people.

“That is precisely one of the problems we have to tackle. That if your oversight mechanism’s a joke, and a rather bad joke at its citizens’ expense, for how long can you laugh it off as a joke?,” he added. “The way we handle it is going to be the difference. But Orwell foresaw a technology that was controlling. In our case we are looking at a technology that is ever-developing, and ever-developing possibly more sinister capabilities,” Cannataci noted.

UN special rapporteur on privacy also pointed to the revelations made by American whistleblower Edward Snowden, calling them "very important." He said: "Snowden will continue to be looked upon as a traitor by some and a hero by others. But in actual fact his revelations confirmed to many of us who have been working in this field for a long time what has been going on, and the extent to which it has gone out of control.”

In June 2013, the U.S. whistleblower revealed that the NSA has been collecting the phone records of millions of Americans and foreign nationals as well as political leaders around the world. Following the revelations, Ed Snowden fled the United States to avoid espionage charges.