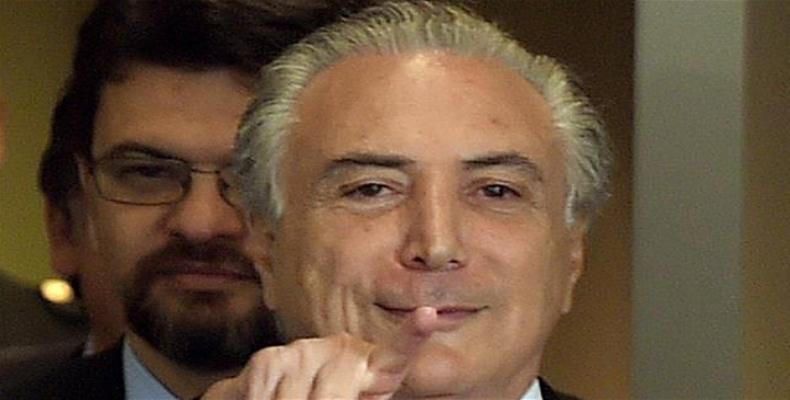 Brasilia, June 14 (RHC)-- Brazilian interim President Michel Temer said "a war" has marked his term, as Sunday marks his first month in power.  Local newspapers said that things have not gone as Temer expected in the past 30 days.  He has lost three ministers of his all-white-male cabinet, who were forced to resign after being accused of trying to obstruct a corruption probe, which involves the state-controlled oil company Petrobras.

The interim president is under scrutiny over testimony linking him to the scandal and a a high court justice ruled last week that Congress should consider impeachment proceedings against him.  Temer was the vice president and became president after leading an impeachment trial that suspended President Dilma Rousseff, in a move that Rousseff’s supporters have called a “parliamentary coup.”

A recent poll found that the senate imposed president currently holds a two percent of popularity among Brazilians and that has been showed in the several demonstrations that call for his resignation, especially after he decided to impose a neoliberal agenda of privatization and radical austerity.

Analysts suggest that his move against Rousseff was made to enable his colleagues from the Brazilian Democratic Movement Party (PMDB) to obstruct and eventually terminate the ongoing  investigation, but most of the members of the present unelected ruling party are personally implicated in a case that basically focuses on graft involving engineering firms and Petrobras between 2003 and 2014.

President Rousseff was suspended after being accused, without any evidence, of using government accounts in 2014 to increase public spending as a means to convince people to vote for her reelection.  If impeached, Temer will continue to govern until 2018.  However, Rousseff is calling for a referendum on whether to hold early elections as a way to resolve this political crisis.